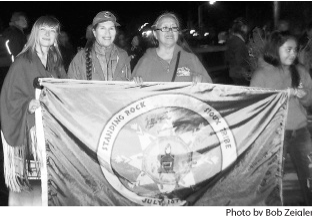 A local “Indigenous Caucus” has formed with Olympia Stand to stop fracking proppants (sands) shipments by the Port of Olympia and the Union Pacific Railroad. The sands are destined for North Dakota oil fields and are essential to the dirty oil hydraulic fracturing industry that threatens the Standing Rock Sioux’s only source of drinking water—the Missouri River. The Indigenous Caucus seeks to interrupt that supply chain and the implied complicity with the Port and railroad in acts of environmental injustice and human rights violations.

Throughout U.S. history, Indigenous peoples’ lands and communities have been targeted as prime locations for nuclear waste, toxic mining, and toxic dumps. That is again the case as the Dakota Access Pipeline (DAPL) , originally planned for the City of Bismarck, was met with huge outcry by that city’s predominantly white resident population, and was therefore then diverted to the Standing Rock Sioux’s only water source.

The local Indigenous Caucus recently gathered as a collective voice in defense of water and in solidarity with the Standing Rock Sioux’s peaceful resistance to the DAPL. The Caucus adamantly opposes any complicity in that process and is united in resistance to the shipment of fracking sands through Olympia.

The Indigenous Caucus members are American Indians and Alaska Natives living “urban” mostly by necessity—whether due to lack of jobs and housing in their communities or reservations or because they are heirs of those whose families were relocated in the government diaspora of the 60s and 70s. Urban Indians, while comprising 78% of the American Indian/Alaska Native population, are most often invisible to society. They are separated from their culture, language, traditions, and communities, are often invisibly struggling to survive within cities and urban areas, and have little to no political power or influence. But in this Indigenous Caucus there is a renewed sense of strength and voice found in their alliance as land and water defenders working for environmental justice and human rights.

Said Indigenous Caucus and Alaska Native Aleut member Sara Flahaut, “I knew I needed to join Olympia Stand and connect with the Indigenous Caucus because it was the right thing to do. While I have continued to try and support Standing Rock from afar, it is true what they say: change starts at home, in our local communities. I would love to see more local, grassroots movements that hold space for Indigenous People pop up all over our country. Together we can stop the black snake and ensure a future for our children.”

Karama Blackhorn, a caucus member who is Rogue River Shasta, added “As urban indigenous people we stand in solidarity with the exercise of sovereign rights of our relations at Standing Rock. We stand in solidarity and demand as citizens of the federal government to recognize our nations. We will hold our cities, states, and federal governments accountable until the rights of the natural world and native laws are respected. Over half of Native people are invisible, unrecognized, and urbanized. We have been a divided people. We are now united. We are now organized. We are now of one mind ready to protect the rights of our people and our mother earth.”

We Indians have been fighting for our land and water against corporate and government oppression for 200-plus years. The injustice by the government and industry together with the brutality of the paramilitary police response in Standing Rock has brought tribal nations and Indigenous peoples together in an unprecedented collective stand to support the Standing Rock Sioux people. Our Indigenous Caucus refuses complicity in any part of the North Dakota fracking industry’s assault on Mother Earth and water. We are sickened by the brutality against our relatives in Standing Rock and we are determined to disrupt the supply chain to the dirty oil fracking in North Dakota.

Considering the Port of Olympia’s nefarious history of blighting the land and water, and its continuing efforts along with the City of Olympia to militarize our community, it is past time for the entire community to engage in a re-visioning of the port. Some recommendations by this Urban Indigenous activist:

Last week, Olympia Stand and the Indigenous Caucus had, in good faith, scheduled a meeting with the Union Pacific Railroad attorney who had requested a negotiation meeting. He promised that if a meeting was scheduled by 5:00 pm on Thursday, they would not raid the camp. So, considerable effort went into coordinating a meeting by the imposed deadline. Ultimately, it was arranged for the next day at 4:00 pm at a traditional tribal location. Letters of invitation were quickly drafted and sent to two of the potentially affected Medicine Creek tribes.

Yet, twelve hours before the meeting, like so many times in history, the Indians were betrayed! In paramilitary fashion, the railroad police accompanied by local, county, and state police sneaked around in cover of night to raid the peaceful camp. This, as a good faith meeting with railroad officials was to occur twelve hours later. Twelve water and land protectors were arrested, eight of whom had charges withdrawn in municipal court the following Monday. Then, on November 28, attorney Larry Hildes entered not guilty pleas for four protectors who were arraigned for criminal trespass in county district court.

They may think this is the end, but this is just the beginning. As an Urban Indian activist for more than 25 years, it has been my honor to stand beside many Olympia Stand activists whom I consider allies. Whether organizing with the Indigenous Caucus or with Olympia Stand and its many affinity groups, individuals are united in our refusal to be complicit in the Port of Olympia’s dirty work as it leverages environmental, social, health, and economic devastation on some of the most vulnerable, including Indigenous tribes and peoples.

A tsunami of Indigenous peoples, especially Urban Indians, and allies across the planet are reclaiming our connection to land and water in honor of our ancestors and on behalf of generations to come.

Kyle Taylor Lucas is a former Tumwater city council member, was executive director of the Governor’s Office of Indian Affairs, and is a Tulalip Tribes and a Canada First Nations member of the Cooks Ferry and Lytton Bands of Nlaka’Pamux Nation. She is also a freelance writer and a member of the Native American Journalists Association

The Indigenous Caucus statement for opposing fracking shipments by the Port of Olympia and Union Pacific Railroad:

The Standing Rock Sioux Tribe’s battle with the oil industry and government has reconnected Indigenous Peoples in a collective stand for the defense of land and the protection of water.

So, the Indigenous Caucus is taking non-violent direct action to disrupt the delivery of these fracking sands as we answer the Standing Rock Sioux Tribe’s call for people to stand up to fossil fuels extraction industry across the nation. We stand strongly in support of Native nations in the forefront of protecting traditional lands and water from the Bakken crude oil trains and oil terminals here in Washington.

As the Indigenous Caucus, women, and two spirits, living in Coast Salish Territory, we are convinced that if we remain strongly united we will win the resistance against patriarchal government and corporate oppression imposed upon our people, our bodies, our lands and our waters. In taking this stand, we honor of our elders and our ancestor’s teachings to protect and preserve our sacred lands and waters on behalf of future generations.

We are grateful for allies standing with Standing Rock and with us here in our territories. In the words of Billy Frank Junior, “Oil and water don’t mix and neither do oil and fish…. It’s not a matter of whether spills will happen, it’s a matter of when.”

Next:
The email attachment below is from Wikileak’s Podesta files. It…