Water is Life, Everywhere in the World

The house across the street from me has a big sign in the window that says Water is Life. I see it every day coming and going, and despite being awash in news reports of record droughts and mega-fires, rising sea levels and shrinking aquifers, empty reservoirs in Capetown and poisoned water pipes in Flint, I haven’t usually given it a second thought. Not until I sat down to talk with Curt Andino, who recently gave a presentation at Olympia Friends Meeting.

Andino is the newly hired, first-ever Executive Director of Friendly Water for the World, a non-profit organization based in Olympia. For the past twelve years he headed South Puget Sound Habitat for Humanity, and prior to that was the director of the Jail Ministry program of Catholic Charities in Onondaga County, New York.

Friendly Water’s mission is “to expand global access to low-cost clean water technologies and information about health and sanitation through knowledge-sharing, training, community-building, applied research, peacemaking, and sustainability.” The name comes out of the fact that local members of The Society of Friends—otherwise known as Quakers—developed the idea of bringing a simple technology for purifying water to poor and war-ravaged communities where there is little or no potable water.

Friendly Water has projects in 15 countries and counting. In these places people, usually women and girls, have to walk great distances to find water that may not be clean, and then carry it back to their towns and villages, at times risking assault and rape. According to Andino, the UN estimates that more than 2 billion people do not have access to safe water sufficient for drinking, cooking and hygiene; and 4.5 billion lack safely managed sanitation systems. Those most vulnerable and most affected are children. About half-a-million under age 5 die each year from waterborne illnesses, including typhoid, dysentery, cholera, hepatitis A, parasitic infections and diarrhea.

The “simple technology” is the BioSand Water Filter, which Suzanne and Del Livingston, of the Tacoma Quaker Meeting, saw being built in a village in Mexico by a group of Canadian volunteers. Del, who had volunteered with Suzanne in poor communities in Kenya, was captivated by the BioSand filter. He and his wife saw the filter as the ideal technology to meet the dire need for clean water in the communities they served.

After being trained and certified by the Canadians to build the filter, Del and Suzanne spoke about their work at Olympia Friends Meeting. This ignited an enthusiastic response that culminated in the creation of Friendly Water for the World in 2010. With a governing board and a group of volunteers, they set out to make the filters available wherever they found a need. 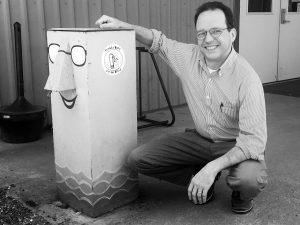 For those of us in the “first” world who think of the garden faucet or a flush toilet as simple technology, the The BioSand filter sounds like something of a wonder.

Curt Andino: It’s a ‘point-of-use’ or household water purification system, using sand and gravel. An environmental engineering professor at the University of Calgary, Dr. David Manz, adapted an old sand filter technology dating back to the 1800s. He developed and field-tested it, and patented it as the BioSand filter in 1993. the filter is made from a 3’ x 1’ metal mold, using concrete for the form with gradations of sand and gravel inside. Dirty water is poured in the top and flows through a biologically-active “biomass” layer. By the time it gets to the bottom and rises up a plastic tube to an outlet, 95 to 99% of bacteria and viruses have been removed along with 100% of worms, parasites, amoeba, protozoa, and other noxious or poisonous substances.

Friendly Water does the training and provides the molds. The filters can be made locally by the people themselves. We estimate the materials cost for the filter at $50, more or less—the molds cost about $500 but are loaned for free as long as they’re in use. In many places the filters and the clean water itself have become a source of income. The filters can produce 23 – 24 gallons of water a day, and can last as long as 30 years with minimal maintenance. Countries where Friendly Water has projects range across the entire globe. And while each project serves poor and oppressed communities lacking enough clean water to ensure people’s health and well-being, each community has its unique set of variables, needs, and conditions.

How does a small, modestly funded organization, run for the most part by volunteers, operate on such a grand, multicultural, scale? “If I had only a one-word answer,” says Curt Andino, “it would be…empowerment. In fact, that’s what it says on our brochure: How do we do it? We empower people and communities! And how we do that? Well, each project would have a somewhat different story, one reflecting its unique circumstances. The only thing they’d have in common is that the people themselves, in their determination, resourcefulness, inventiveness, intelligence, in their love and generosity, would be front and center.

In June of this year, Friendly Water for the World was given the Energy Globe National Award for the Congo—sometimes called ‘Nature’s Nobel Prize’—for our work with the women of Minova, Congo. In 2012 the women were the victims of a mass rape by members of their own national army. Some became pregnant, some contracted HIV, many were abandoned by their husbands. They had to withdraw their children from school because they could no longer afford the cost. Everything was made worse by the endemic waterborne illnesses: diarrhea, dysentery, typhoid, cholera—for which there was no money to treat.

In October of 2016, with a $3200 grant, we trained the women of Minova in fabrication of BioSand Filters, and in community hygiene and sanitation. By January of 2017, they had built and sold 172 BioSand Filters, enough to provide clean water for almost 2000 people, generating $9000 in income. Since then, they have built and installed more than a thousand filters, stopped cholera epidemics—with just potable water!—in two refugee camps. They’ve started two more BioSand programs in collaboration with women in similar circumstances.

There are many, many other ripples from those first drops of clean water in Minova. Maybe the most important thing about it, from Friendly Water’s perspective—which takes us back to that one-word answer above —was the title of the official Energy Globe National Award: Empowering the Women of Minova through Clean Water Technologies.

I told Curt Andino about the poster in my neighbor’s window. “Yeah, I’ve seen those around Olympia—didn’t they come out of the Standing Rock movement? It’s what we’re about—the Friendly Water movement: Water is Life!”

How could people find out more? “There are many more amazing stories we can tell, and we’re always looking for volunteers, collaborators and donors. Periodically we do trainings in construction of the BioSand Filters, and are most happy to do presentations on our work.”

James O’Barr is a recent transplant from New York’s Hudson Valley, where he worked in health care for migrant and seasonal farmworkers, theatre in the community and in prison, and writing as way opened.