An infill plan sure to make developers happy

If you live in one of the older, near-town Olympia neighborhoods, big changes are looming for your neighborhood.  The same goes for your neighborhood if it’s zoned R6-12  (sixto 12 housing units per acre) or R4-8 within two blocks of a Neighborhood Center, commercial business, Bethel Street, Division Street, 18th Ave SE, 22nd Avenue SE or Boulevard Road.

Before covering the looming changes, let’s look at what’s allowed now in these neighborhoods. In addition to single-family homes there can be tiny houses, single cottages, ADUs (accessory dwelling units), manufactured homes and townhouse buildings with four or fewer units.

And what is a Neighborhood Center anyway? A designated area with smaller retail stores near transit, like the San Francisco Bakery, Handy Pantry, Frog Pond, Westside Co-op, etc.

In the areas mentioned above, triplexes, fourplexes and 12-unit courtyard apartments will be allowed.  Duplexes and 9 to 14-unit townhouse buildings will be allowed in those areas and everywhere else.  There can be two-story accessory dwelling units, with no off-street parking and no owner living on site. ADUs won’t count as housing for calculating density.  Generally, off-street parking requirements in new rules—deemed “Missing Middle” or MM—are significantly reduced.

Most startling, all buildings can now be 5 feet from side property lines and almost all can be 35 feet tall (typical two-story house height is 25 feet).  MM cuts lot sizes and widths for multifamily structures. For example, the minimum lot width a duplexe goes from 80 ft to 40-45 feet. Triplexes and fourplexes can also have a lot width of 40 – 45 feet: long, skinny buildings.

Why is the City doing this?

The “Missing Middle” project has no stated goals, and isn’t specifically prescribed by the Comprehensive Plan. Certainly MM would increase housing density dramatically, which is a general goal for increased efficiency. We know that opening residential neighborhoods to large multifamily buildings, which generate larger income, will benefit outside investors. These investors will pay higher prices for properties in our neighborhoods, benefitting whoever sells their house or property to them. Those who don’t sell will be left with a radically-changed landscape.

The Olympia 2014 Comprehensive Plan, created with exhaustive public input, guides Olympia’s laws and codes for the next 20 years. While directing housing densification, it also acknowledges that Olympia has enough buildable land to easily handle the next 20 years of population growth. It recommends densifying existing neighborhoods, as well as commercial areas and vacant land, but in ways that don’t degrade the residential quality of life there.

For instance, Comprehensive Plan PL 14.3 says to “disallow medium or high-density development in existing low-density neighborhoods. PL 14.2 says to “concentrate housing into three high-density neighborhoods: Downtown Olympia, Pacific/Martin Way/Lilly triangle, and Capital Mall” (nodes). PL 3.8 tells the city to “discourage demolitions or partial demolitions of intact historical structures.” PL 20.1 requires that “development in established neighborhoods be of a type, scale, orientation and design that maintains or improves the character, aesthetic quality and livability of the neighborhood.”

There is no mention of the large “missing middle” housing in low-density residential areas in the Comprehensive Plan. MM should require an Environmental Impact Statement, but the City made a  Determination of Non-Significance – meaning there will be no environmental effects of these extensive changes on humans or the natural environment.

The MM took shape in a non-public process involving the Olympia Planning Department, local density advocates and developers. A revealing quote from the 2015 Downtown Strategy Toolbox (not the Comprehensive Plan) says: “Move forward with the “missing middle” and evaluate opportunities to increase density in areas where neighborhood resistance is low and services and infrastructure are in place to support higher density.” Large MM housing is proposed mainly for older, lower-income neighborhoods near downtown. Those least able to resist seem to have been deliberately targeted. Of the three designated high-density nodes, the City has started building only in the Downtown Olympia neighborhood.

MM has been sold as a way to increase affordable housing by increasing inventory, and controlling suburban sprawl, while staying within housing density limits. Instead, while it has no way to monitor zoning density, it has six ways to boost density above zone limits. It has no mechanism to control sprawl. It will encourage tear-downs of older, inexpensive homes, to be replaced by investor-owned multifamily structures, where each unit will rent for more than what was destroyed. Without MM, our neighborhoods can still densify to their per acre unit limits, using compatible, currently-allowed housing, including ADUs.

2008 to 2015 was the worst “recession” in 80 years. During that time, very little housing was built. In the last 3 years, the economy has improved dramatically. Everyone who waited to buy or rent a house wants one now. Hence the rapid increase in demand and price. Hence also an explosion in housing construction, which will increase inventory rapidly.

A Zillow study of westcoast renters and buyers in 2016, found that 83% of buyers and 47% of renters were looking for single-family homes. Olympia already has these homes in healthy, thriving neighborhoods near-downtown, with 20% of owners over 65, soon to be made available to younger people. These can eliminate the need for the next ring of suburbs, unless MM housing erodes the sunlight, space, quiet, and views that make these neighborhoods livable.

Basically, the City is saying to older neighborhood residents, “sorry, your neighborhood has now been reclassified as urban, with medium to high density”.

Jay Elder is a resident of the Bigelow Neighborhood and was the Chair of the Council of Neighborhood Associations and was a member of the board of the Olympia Northeast Neighborhoods Alliance.

More detail on the MM proposal is at http://noolyupzone.yolasite.com or go to (http://olympiawa.gov/city-government/codes-plans-and-standards/missing-middle.aspx) and download “Summary of City Council final draft code changes.” To see maps that show places where large MM housing is allowed, “click here” on the same page under “LUEC recommendation.”  Not simple. 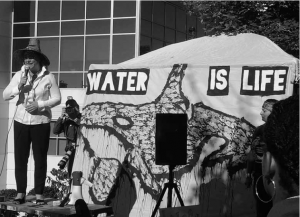