Building the movement for immigrant rights

Following the shock of the November 2016 presidential election, immigrant rights activists quickly moved into resistance and movement-building. Out of the expanse of already active groups and legal supports for immigrants emerged WAISN – the Washington Immigrant Rights Solidarity Network. Anyone on the WAISN listserve or who checks its webpage quickly learns that this is a vital zone of analysis and advocacy.

WAISN counts as members over 100 groups large and small throughout the state that focus on labor, immigration and LGBTQ rights, among many other issues. The network includes the ACLU of Washington, American Federation of Teachers, the Dream Coalition, Somos Seattle, Washington State Labor Council, Washington Defenders Association, Colectiva Legal del Pueblo, One America, Jewish Coalition for Immigrant Justice, CASA Latina, and the Church Council of Greater Seattle. The network is growing, as groups link together to strategize in response to emerging conditions.

Here are some of WAISN’s initiatives:

Here in the South Sound we are learning to navigate the complex web of organizations that span a range of strategies and activities, from legal advocacy to direct action to community education (see the short profile of Strengthening Sanctuary and other local immigrant rights groups in this issue). Some of us are also involved in challenging conditions at the Northwest Detention Center (NWDC) in Tacoma.  Scott Goddard has been especially involved in supportive actions at the NWDC.

“The Northwest Detention Center becomes a point of focus that creates overlap and interaction between different groups involved with immigration issues. Groups such as Northwest Immigrant Rights Project, WAISN, Northwest Detention Center Resistance, and others are working political and legal angles to reduce detainment levels and advocate for improved conditions for the detainees inside. Then there are groups such as AID NorthWest, World Relief and others assisting immigrants with challenges they face after their release from the detention center. All of the organizations have different focus points and operating procedures, but they communicate well with each other and cooperate when their work overlaps.”- Scott Goddard

A few of us from Strengthening Sanctuary recently participated in a WAISN training. A central feature of the day was Deportation Defense Training, led by Carolina Canizales and Angie Junck of the Immigrant Legal Resource Center (ILRC) in San Antonio.

Carolina presented the basics on how community members can effectively respond to detentions. The focus was on building teams, assessing the urgency of situations, deciding how public the campaign should be, and building skill-sets (from legal observers to family assistance to media coordination).

Carolina’s workshop was followed by wise words from Angie, her mentor.  Carolina is the experienced community organizer, Angie is the attorney. Their partnering drove home this message:  Attorneys should work with, not for, immigrants. They must take their lead from the community and place legal strategy in the community, with leadership from immigrants who daily face dire circumstances. Angie stated, “We need to up our expectation of lawyers,” and work toward strategies that include the law but are not limited to legalistic approaches. Build legal services, yes, but also challenge the infrastructures of power that undermine the rights of immigrants.

Each day brings new challenges. Recently the Trump administration announced plans for indefinite family detentions and weaponizing the “public charge” rule that aims to strip immigrants of most social supports.

WAISN is persistently examining the national landscape of these threats and the resistance forming to oppose them. WAISN and its network of allies are preparing to return to the state legislature in January with a renewed determination to revive the “Keep Washington Working Act” (SB5689 from the 2018 session), which would create statewide sanctuary for all.  Through a statewide meeting (likely to be held in January in Central Washington), WAISN will continue to shape its organization and empower communities throughout the region.

Joel LeBel, a Strengthening Sanctuary member who participated in WAISN’s training, offers this profile of WAISN’s place in the broad movement for social justice.

“WAISN’s commitment to creating a statewide network is deeply valuable as it provides the space to develop those lasting relationships needed for collective action and transformation. While it is clearly more efficient to work within a network, a connection between Strengthening Sanctuary and WAISN can produce much more than mere instrumental value. I believe the greatest value lies in a well-developed relationship with WAISN that aligns the ongoing work of Strengthening Sanctuary with the group’s fundamental goals of centering the voices of impacted communities and seeking guidance and direction from immigrants, refugees, and leaders of color.”

Lin Nelson is a retired Evergreen faculty, now involved in a number of community organizations, including Strengthening Sanctuary. She can be reached at linnels@gmail.com 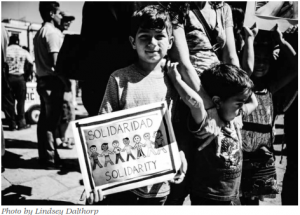