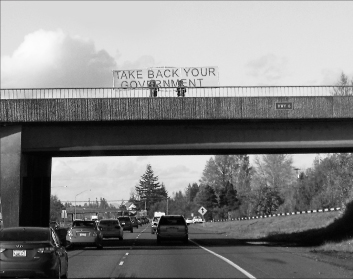 April 25, 2015 was the official launch date for WAMEND’s I-735. This Initiative would make Washington State the 17th state to call for overturning the recent Supreme Court decisions that allow corporations, billionaires and other “artificial legal entities” to spend unlimited sums of money on political campaigns.

WAMEND is an organization of Washingtonians working, as volunteers, to bring back “government of the people, by the people, and for the people”.

On Thursday January 21, 2010, the United States Supreme court announced a 5 to 4 decision in a landmark case, Citizens United v Federal Election Commission, that corporations and other “legal entities” had a first amendment right to spend virtually limitless amounts of money from their treasuries on political campaigns and in contributing to political Super PACs, so long as they do not “coordinate” spending with a candidate. The decision threw out, or rendered ineffective, most of the existing campaign finance reform laws, and because of the dizzying array of exceptions that exist for funneling political money through Super PACs, the 501c and 527 political organizations would allow big corporations and unions to circumvent much of the remaining legislation.

The next nail in the coffin of political finance reform was the United States Supreme Court decision in the case of McCutcheon v Federal Election Commission. The decision lifted the cap on the number of political candidates to whom a donor could contribute. After McCutcheon, any one super-wealthy individual could theoretically write a campaign check to each and every member of the U.S. House of Representatives and each and every member of the United States Senate and all the candidates running for office against them!   It remains true that there are individual limits of $2,600 and $5,000, respectively, to how much may be contributed directlyto any one candidate, or PAC. However, there is no limit on the amount of money that may be contributed to a Super PAC!   And an infinite number of these political organizations can be created to funnel money to candidates and other political organizations. An individual can give the base amount of money to each and every political organization. Thus, in the aggregate, there is no legal limit to political spending by those who can afford it.

Our government is for sale to the highest bidder. We are no longer a “government of the people, by the people and for the people.” We have become a nation owned by and governed for the benefit of about 1,000 of the wealthiest families in America. We are governed by an oligarchy that holds political power, without regard to which party or candidate is in power because, with few exceptions, the oligarchy owns them all.

The only way to trump the disastrous U.S. Supreme Court decisions that helped create this mess is through a constitutional amendment.   Sadly, about half the state legislators we elect—supposedly to serve the people—are supported by the deep pockets of the super-wealthy and serve the interests of billionaires first. Nearly half of state legislators refuse to support a constitutional amendment to overturn the Supreme Court decisions that favor the invented “rights” of multi-national corporations and Billionaires over the rights of the individual person.

So it is left to the people of the state of Washington to use our constitutional right of the Initiative process, to impress upon our state legislature the will of the people. We need 250,000 valid signatures of registered Washington state voters on I-735 petitions to begin this process.

Initiative-735 tells the Washington state congressional delegation, including our two U.S. Senators, that we want them to propose a constitutional amendment that says constitutional rights belong to individuals not corporations. Furthermore, Initiative 735 declares that the proposed constitutional amendment should make clear that spending unlimited, unregulated campaign money is not a first amendment free speech right and thus our elected representatives, can, once again, legislate meaningful campaign finance reform laws that prevent influence peddling and require public disclosure.

The initiative makes it known that when such a constitutional amendment is proposed by Congress to the states, it is the will of the people of the state of Washington that our State legislature vote to ratify this amendment.

This is not a quick, simple nor easy process. The Constitution has only been amended 15 times since the Civil War. Amending the Constitution made slavery illegal, (1865) granted black men the right to vote (1870), allowed for the direct popular election of United States senators by the people of each State (1913), recognized a woman’s right to vote (1920)…and made it illegal to charge a poll tax as a condition of a citizen to vote (1961) and extended voting rights to citizens at least 18 years old (1971).

None of these advances in remedies to our constitution were easy…women fought for nearly 75 years to gain their right to vote. But our great U.S. Constitution allows, under article V, provisions for ensuring the viability of our republic and the great democratic principles it envisions by making available to the people the ultimate sovereign power to exercise “the consent of the governed”.

We can do this. Our heritage and our forebears have set forth an orderly, time-tested and patriotic process of amending our constitution when injustices demand remedy. This process requires hard work…diligence.   We in our generation are called to a duty that others before us have answered and we shall not shrink from the challenge. We owe this duty not only to those who came before us, but, more importantly, we owe this duty to those who will follow, the children of succeeding generations.

In the November 2014 elections, citizens across the nation voted in margins of 70% and greater for their legislators to pass a constitutional amendment to clarify that limiting money in election campaigns does not limit ‘free speech’. There is a growing tide across the country to get big, anonymous money out of politics and to clarify the rights listed in the Constitution are the rights of individual people only. So far, 16 states have urged Congress to pass an amendment to clarify that only people are entitled to free speech rights, and these rights do not include unlimited, unregulated campaign contributions.  Washington State could be the 17th.  When public outrage reaches a critical pitch, Congress will have to listen to our voices.

Julie Rodwell was born in the UK and immigrated to North America in her 20s. She has a degree in economics and politics from Oxford University and in planning from Glasgow University. She’s been a U.S. citizen since 1978. Julie retired in 2011 from a 40+ year career in transportation project- and policy-planning and is currently writing a book Tiny Footprints about tiny carbon footprint communities and why we need to build them.

Michael Savoca and his wife, moved to Washington state from the east coast the day after they got married almost 40 years ago. They built a log cabin on the high prairie near Rainier and raised three children. Michael last worked as a mental health residential treatment counselor with teenagers and young adults at Maple Lane, and before that as a race car mechanic.

WAMEND.org is a not-for-profit organization. Signature gathers, steering committee officers, and our executive board all serve for free. We have expenses related to printing initiative petitions and we employ, at modest salaries, three staff in our campaign office to coordinate and communicate with our members and affiliates across the state on a full-time basis. To make a donation please visit our website at www.wamend.org.

Next:
What it would mean for millions of children living in…