Last month, WIP printed a photo (below) of Father Leahy offering “curbside confessions” in Olympia. Then this happened:  others have followed Leahy’s lead. Below is the letter he wrote to Rev Jose M. Alvarez

I live in Olympia, Washington. A neighbor of mine sent me the Seattle Times story on your parking lot confessions.

Although I only did four years at St. Edwards Seminary, “Way Back in the Day,” I decided to do “Curbside Confessions.” My only penitent so far was my next door neighbor, a UU member.

Nevertheless, when my photo appeared in our monthly newspaper, Works in Progress, I had lots of questions about when I was going to hold curbside confessions again!

Although my uncle, Lester Leahy, was pastor of Olympia’s St. Michael’s parish, I think I’m going to refer people to your service.

Hope all is well in this time of social solidarity with physical distancing. 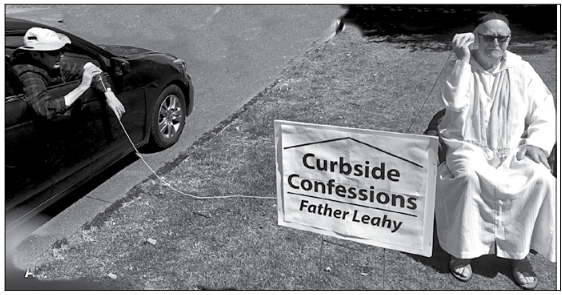 Instead of stockpiling medical supplies in case of a pandemic, the world’s nine nuclear-armed nations spent 72.9 billion on their 13,000+ nuclear weapons in 2019. Our elected officials lead the way accounting for almost half or $35.4 billion. We also exited a major arms control treaty, and deployed a new tactical weapon. The information was compiled by the International Campaign to Abolish Nuclear Weapons, who wryly pointed out that these weapons have nothing to do with security while robust and universal health care programs do. Trump appointees blocked a Washington law that required fossil fuel companies to remove volatile components from oil shipped to the state. “A state cannot use safety as a pretext for inhibiting market growth or instituting a de facto ban on crude oil by rail with-in its borders,” wrote Paul Roberti, chief counsel of the Transportation Department’s Pipeline and Hazardous Materials Safety Administration

….Spending by powerful companies, trade groups and other clients spiked to near-record levels from January through March as the private sector rushed to seize the lion’s share of $2.2 trillion in taxpayer money intended to alleviate effects of the coronavirus.

$903 million flowed from big business groups into Congressional hands in the first quarter of 2020. More than 1,500 lobbying clients specifically reported their efforts to influence the writing of the CARES Act, making it the second most-lobbied bill in the history of lobbying. www.opensecrets.org

Next:
The advent of a pandemic virus showed us in vivid…
← About This Issue — June 2020 — Linkages