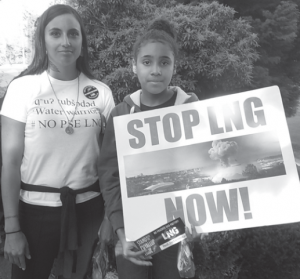 There are currently five natural gas pipelines proposed or underway across the northern Canada wilderness, headed for LNG projects on the coast. (Plants are also proposed in Tacoma, WA and Coos Bay, OR.) The one crossing Wet’suwet’in territory is part of TransCanada Corp which wants to move the gas to a facility near Kitimat where it would be converted to a liquid form by LNG Canada for export to Asian markets. The investor and government rap on LNG is that it will reduce carbon emissions overall, but that is strongly disputed.

Producing, transporting and liquifying natural gas is acknowledged to produce high levels of carbon. The proponents argue this won’t matter because LNG will replace coal in foreign countries; and in BC, the government is proposing financial incentives and other measures to reduce and offset LNG carbon pollution. If these optimistic claims aren’t realized, the result will take BC backward on its climate goals.

In a 2016 letter opposing one of Canada’s LNG projects, 90 climate experts from around the world dismissed arguments that selling LNG to other countries would cut GHG emissions in those countries by allowing them to stop burning coal.  Environmental troubles brought by LNG tankers to marine communities are ignored:  “Industrial society is really at a crossroads. We are at a time when we have to decide between business as usual, which is bringing about massive climate change, or doing those things that are absolutely necessary if we wish to maintain any orderly civilization on this planet.”