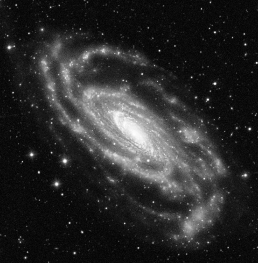 Splendor in the cosmos

Everything we can see of the Universe is only like a small sprinkle of dust on the surface of some tremendous unexplored cosmic ocean. Scotty Yoos recently asked me, “Why not capitalize the word Universe?” I only said that it would be considered silly. Scotty may be right, let’s capitalize Universe, for our place in the scheme of things; and use a small u for any other universe. Next he asked if the Universe is really expanding. I said, “Yes, no one knows why.” Well, how can we be sure?

What is meant by the expanding Universe? Start with the Doppler shift, it is what the police radar employs to catch speeders. Light waves reflected off a moving car will get a little frequency shift depending on the car’s speed. If we are moving toward the police the shift will be toward the blue (higher frequency), moving away from the police and the shift will be toward the red (lower frequency). When we look at far off galaxies they all seem to be shifted toward the red. The farther away a galaxy is, the more red shifted their light spectrum; they are moving away. The exception to this rule is our little local group of galaxies–galaxies close enough for gravity to overpower the expansion. They are pulled together in mutual orbit.

Around five billion years in the future, our Milky Way galaxy is expected to undergo a collision with the great Andromeda galaxy. This is approximately the same time period as the end of the life cycle for our own Sun. Those will be exciting times! Over those long five billion years we will have had time to develop space travel technology and find safer planets to live on. Or, could we refuel the Sun and save everything? With a decent pair of binoculars you can see the Andromeda galaxy for yourself, and it is still a long way off.

Our local group of galaxies is drifting around the outskirts of the Virgo cluster of galaxies. The Virgo cluster is a large group of galaxies centered about sixty million light years from us. They are still near enough to hold our local group in gravitational orbit. In the far distant future we will be drifting closer to the rest of the Virgo cluster galaxies. By then maybe, the human race will be a member of the larger civilization of space faring species, “The Federation.” Our membership will likely depend on us becoming much less barbaric than we are today.

Beyond the Virgo cluster there are a billion more clusters of galaxies. Being farther away, those may always be out of our reach. The expansion of the Universe is sending the more distant galaxies away from us faster and faster, they are too far away for gravity to prevent them escaping. Eventually they should drift out of sight and be gone from our visible Universe, leaving us alone with the Virgo cluster; or if we’re lucky we might hold on to a larger grouping of galaxies. So, while our Universe is expanding, our neighborhood may be limited by time and space. The Virgo cluster, with its 2500 galaxies (where we are likely to stay) is still a tremendously large place.

Gravity is a property of matter and energy. Given a large enough chunk of matter the surface gravity may even prevent light from escaping. This describes a black hole. Black holes originate when very massive stars run out of nuclear fuel. They then collapse and explode as a supernova, leaving a cinder so dense that gravity overpowers everything. Now the Standard Model of Cosmology claims the big bang produced the entire Universe out of nothing for no known reason. Dark Energy is causing the Universe to expand faster and faster. Dark Matter holds galaxies and clusters of galaxies together. The model does not say how these things could be so, it only says that this is what it appears to be. Then there will be the long, slow process of all the stars and planets gradually spiraling into one extra large black hole at the center of our galaxy cluster. When the energy and matter is all in, an even longer, slower process of the black hole evaporating off into particles and heat radiation.

A hypothesis called Cosmological Natural Selection examines an idea that our Universe is a result of the evaporation process from a previously existing black hole within a larger universe. And, the laws of nature are thought to evolve slightly in the black hole evaporation process. Searching for deeper truths, the astrophysicist, Lee Smolin developed the idea of Cosmological Natural Selection because it explains where our Universe came from and why it developed nature’s laws the way they are. There are suspected to be lots and lots of smaller black holes in our Universe. Could they each be the seeds for little universes with all the mysteries and drama that our Universe has? Yes, they could.

The “surface” of a black hole, known as the event horizon hides entirely what is inside. When a falling object crosses the event horizon entering a black hole it could find that the laws of nature evolve at the boundary going in, as well. What if that threshold were to appear from the inside just the way the big bang appears to us as if we were outside. Matter being pulled in might get the view as though space were expanding. The driving principle for Cosmological Natural Selection being: a universe succeeds by producing great numbers of black holes, each with a long life expectancy. So, conditions in our Universe evolved to the biology-friendly state we see. Lee Smolin is currently developing tests to support or refute the Cosmological Natural Selection idea. See more on this topic in the April 2014 issue of Physics Today magazine, or check your local library.

It may be that with the accumulation of presumptions and approximations, I have slipped over the edge to the realm of fantasy. Many respectable theorists have done as much, there are alternative scenarios. Come what may, given the evidence available, Cosmological Natural Selection looks like a plausible story. When better evidence comes to light, we can of course reconsider.

Next:
When the Harpers Magazine arrives, it is a family tradition…