The Grays Harbor Shorebird Festival was all set to celebrate its 25th anniversary this year, complete with tours, special guests, and, of course, over 500,000 sandpipers, dowitchers, plovers, and dunlins. The festival was cancelled because of the coronavirus pandemic, but the Sandpiper Trail is opens. We can use this time to reflect about why protecting the estuary is paramount and to understand how its history has affected the habitat that serves thousands of birds on their migratory journeys.

The Chehalis River discharges into the estuary now known as Grays Harbor. It is the homeland of the Quinault and Chehalis people, who have inhabited this area for thousands of years. But much has changed in the last 200 years, and this special area needs our help. 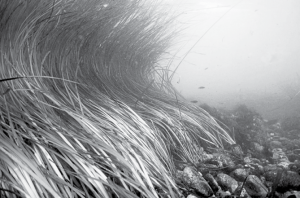 Why protecting eelgrass is so important now

Eelgrass is a critically important plant; it protects coastlines from erosion, mitigates climate change by absorbing carbon dioxide and methane, and provides food and habitat for invertebrates, fish, and birds. In order to protect the unique habitat of the Grays Harbor Estuary, we need to protect eelgrass from the effects of development, dredging, pollution and sea level rise. Approximately 30 % of the world’s eelgrass has vanished since the 1870s.

Two species of eelgrass offer similar ecosystem services but inhabit different elevations in the estuary. Japonica generally grows higher in the intertidal zone, and marina grows in deeper water. Because Japonica makes harvesting shellfish more difficult, the interactions of the two species are the subject of much scientific study. Growers were recently permitted to apply a herbicide to manage Japonica on commercial clam beds.

This article focuses on native eelgrass. Healthy marina eelgrass meadows are a food factory for migrating birds, as well as for many aquatic species. Eelgrass is known to exist in several areas of Grays Harbor, including North Bay, Bottle Beach, and Bowerman Basin and efforts are underway to expand mapping.

The Port of Grays Harbor 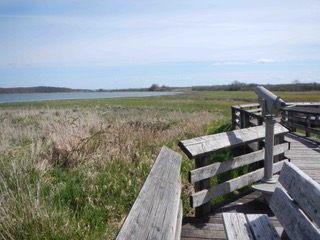 estuary area. The first load of lumber was shipped out in 1880, but the ancient forest is long gone, as are the mighty salmon runs that at one time produced over a million fish annually.

The Port of Grays Harbor was formed in 1911. The mission of the Port is “to best utilize our resources to facilitate, enhance and stimulate international trade, economic development and tourism for the betterment of the region.” Port tenants and others produce lumber, wood chips, paper, and other commodities. Port terminals facilitate shipping of soybeans, grains, lumber, wood chips, cars, trucks, methanol and biodiesel. Some of these arrive on trains and are shipped out in ocean tankers, or vice-versa.

The shipping channel requires copious dredging to allow passage of vessels. So much dredging, in fact, that between 1940 and 1975, 3,850 acres of wetlands along the estuary’s shores were filled with dredge spoils from the channel. In some years, up to 50 acres of wetlands were filled annually. In the recent past, the Port attempted (and failed due to public outcry) to build shipping terminals for coal and crude oil. Now the Commissioners hope to construct an export facility for potash in an area close to the Refuge.

Ways to protect eelgrass and the Grays Harbor Estuary

By taking steps to protect eelgrass, we can help to prevent the consequences of development and other threats to the estuary. Here are two options to raise awareness and help protect this estuary:

Establish an Aquatic Reserve (AR). ARs are Department of Natural Resources-owned lands of special educational or scientific interest, or of special environmental importance. Establishing an AR within the Grays Harbor estuary would help to conserve and enhance this special area, and would help to promote stewardship of aquatic habitats and species.

Your Twin Harbors Waterkeeper team is exploring these possibilities and looking for community support and volunteers. To learn more, sign up for our e-news at the website below.

Lee First is a Twin Harbors Waterkeeper. She can be reached at 360.389.2979 or by visiting twinharborswaterkeeper.org.

In 1988, Congress authorized the establishment of the Grays Harbor National Wildlife Refuge. The refuge contains a variety of habitats, including open saltwater, mudflats, salt marsh, forested wetlands, and uplands. This mosaic of habitats offers abundant food resources for migrating birds, resident songbirds, and raptors. The Refuge is recognized as a Globally Important Bird Area and as a Western Hemisphere Shorebird Reserve Network Site.

The refuge is sandwiched between the City of Hoquiam’s Wastewater Treatment Facility, the Port of Grays Harbor’s “Jet-Capable Airport,” and the site for the Port’s proposed potash export facility. It includes about 1,500 acres of intertidal mudflats, salt marshes, and uplands, including the area now known as Bowerman Basin.

In 1986, the Grays Harbor Estuary Management Plan called for permanently filling in most of Bowerman Basin for industrial use. The plan was blocked and the Basin was saved, not because the agencies agreed that the wetlands or shorebirds should be saved, but because ornithologist Steve Herman of The Evergreen State College observed a peregrine falcon during a field trip to Bowerman in 1979. The Endangered Species Act brought the fill plan to a halt when federal agencies concluded that filling Bowerman Basin would jeopardize the existence of the endangered peregrine falcon.

Today, the Grays Harbor estuary contains 94 square miles of mudflats, salt marshes, and open water, providing critical habitat for fish and wildlife, including up to 500,000 shorebirds during spring migration. It is one of six major estuaries on the west coast. Because of the elevation of Bowerman Basin, it is the last area in the estuary to be flooded at high tide, and one of the first areas to be exposed at low tide. This creates the perfect area for migrating shorebirds to feed on invertebrates, small fish, and salt marsh plants.

The estuary’s open mudflats provide great wildlife viewing opportunities for the public. The Refuge trail (called the Sandpiper Trail) is open every day during the Coronavirus period from sunrise to sunset, with visitors expected to practice social distancing.