The model is so popular here that Dr. John A. McNamara of the Northwest Co-operative Development Center says Olympia has more cooperatively owned businesses per capita than any other US city (one co-op business for every 5,255 residents).

Many of the newer co-ops are former clients of the NWCDC, where McNamara is Senior Cooperative Development Specialist and where, since 1979, co-op success stories from Idaho to Oregon have been created. 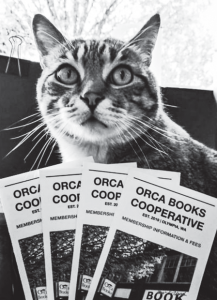 Another longtime Olympia retailer, Orca Books, is currently working with NWCDC to convert to the cooperative model as is Burial Grounds Café.

Cooperatives keep profits in the hands of members and workers

To the casual onlooker, co-ops look just like their privately-owned counterparts (although the employees may seem happier) but a big difference is how earnings are distributed. Under a cooperative structure, the members operate the business collectively. All decisions, from wages to suppliers to health and insurance benefits, are made democratically. Any profits are distributed among members instead of accumulating in the hands of private owners.

The NWCDC specializes in evaluating the viability of proposed co-operative businesses. Funding through the USDA Rural Cooperative Development Grant allows NWCDC’s work in rural communities to occur without direct fees to the client.* During a typical partnership, clients receive an average of 100 hours of evaluation and technical assistance from NWCDC, from staffing and inventory and other day-to-day operations to marketing and distribution. 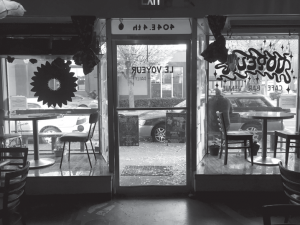 Sometimes the figures don’t add up and a venture is not advised. “If an owner hasn’t been paying themselves a salary, for instance, which is fairly common, will the numbers work when that expense is factored into the new budget?” asks McNamara. “Fails do occur during conversion. Some (businesses) just can’t get to a break-even point.”

The five and ten-year survival rate for worker co-ops is generally double that of conventionally owned businesses, but co-ops require some financing assistance. The NWCDC works with lending institutions specializing in cooperatives, including National Co-op Bank, Washington-based Craft 3, Beneficial Bank, and Shared Capital of Minneapolis.

And for those whose cooperative visions come to fruition, the NWCDC assists by creating articles and bylaws to govern the new venture. By the time new buyers have come this far in the process, they know accountability and participation will be required. It’s challenging work for any new business owner, but for worker-owned co-ops, the new status as member-owners gives them direct sovereignty over decisions that affect their lives and livelihoods.

Sebastian Lopez took McNamara’s summer course on the co-operative business model at Evergreen a few years ago and later found themselves working at New Moon, one of the most successful examples of local co-ops in Olympia. Lopez was inspired by the way members worked and made decisions together. When the New Moon considered but ultimately decided not to purchase Le Voyeur, Lopez and others pursued the option of purchasing it as worker-owners themselves. They sought additional support at Business Services Cooperative who helped the group collectivize.

“Co-ops should be places where people are more empowered,” Lopez says, where shared ownership and democratic decision-making “are the opposite of empty capitalist enterprises.”

Every day, Le Voyeur’s new owners are learning, Lopez says, to embody the cooperative ideal. Frequent meetings help establish the tasks to be shared and help everyone form the habit of regular, open communication. “We are learning to take ownership, sometimes taking on roles we didn’t plan for,” said Lopez.

Safety of owners and the patrons they serve is one of Le Voyeur’s most heartfelt goals. Worker-owners have taken training on de-escalating conflicts. Shifts are structured so no worker ever closes the shop alone. Their egalitarian ideals will be embodied in the business itself, Lopez says. “We are focused on making Le Voyeur the safest space around. We are very queer-friendly. People can feel safe here.”

In August of 2019, Orca Books launched a drive to transition to a member-owned cooperative, with the goal of raising $200,000 by December. As of this writing, $30,000 has been reached. Funding depends largely on online and in-store membership purchases and the store’s GoFundMe campaign. Members who have already joined will begin receiving discounts and other incentives in November. Discounts for those purchasing a membership after November 1 go into effect on January 1, 2020. Learn more or donate at https://www.gofundme.com/f/orca-books-co-op.

*The NWCDC does offer fee-based coaching and training in addition to its other services. For more information contact the Northwest co-operative Development Center at 360.943.4241 or email info@nwcdc.co-op.

Worker co-operatives have a long history of resilience in tough economic times. When a recession occurs, co-ops generally work to keep people employed, avoiding layoffs (often through short-term across-the-board pay cuts). Since co-ops exist to meet member needs, not to maximize earnings, the focus of the co-op during a recession can be to breakeven (or rely on reserves) rather than focus on maintaining profits or dividends. This allows a co-op to keep experienced staff and bounce back faster when the recession ends while also keeping members employed and earning income.