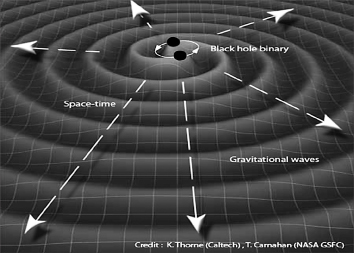 Two years ago, WIP investigated the big science experiment, the  LIGO gravitational wave detector in Hanford, Washington. On the morning of February 11 this year, the LIGO team announced to the world that they had detected, at long last, a clear signal of gravitational waves from colliding black holes. This spectacular event signifies the beginning of a new era in the science of astronomy.

The original WIP article, published in the February 2014 issue, may be accessed freely online at olywip.org, and the LIGO collaborations official peer reviewed discovery –“Observation of Gravitational Waves from a Binary Black Hole Merger”–is also available online in the journal Physical Review Letters. 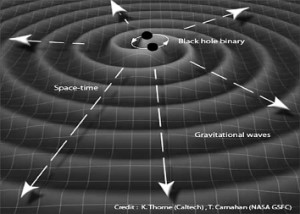 The scientific understanding of gravity just got a whole lot better. As with most discoveries, new findings open up the field for many new and better questions. Now we are more certain of Einstein’s Theory of General Relativity as once described by John Archibald Wheeler. “Mass tells space how to curve and space tells mass how to move.”

The gravitational waves were first detected on September 14 by the LIGO detectors in Livingston, Louisiana and Hanford, Washington. The scientists have spent five months checking every possibility until they were convinced the detection was authentic. As soon as they were sure, the LIGO team gave freely to the world these scientific results. Results which hundreds of the world’s most brilliant thinkers have dedicated their entire careers to develop.

At the beginning of April, 2014, when the “Making Waves” article appeared in WIP, the gravitational wave from these two colliding black holes was still one and a half light years away. That is much closer than the nearest star to our Sun, just under nine trillion miles and headed toward us at the speed of light. Back then, the scientists at LIGO still had no assurance that gravitational waves were even real or if they would ever find them. The great LIGO project was based on the hope that we will be able to  better understand the universe.

These are interesting times, and the dedicated work of scientists like those in the LIGO collaboration share the knowledge that our Cosmos is a magnificent place. Our friend at LIGO, Michael Landry, tells me: “On rates of events, we have the one clear detection in the data from the first 16 coincident days worth of data (about 38 calendar days to accumulate this).  That comprises only a third of the data. We are analyzing the latter two-thirds of the data set now, and will report on results in the next few months. I believe there will be more detections in our coming run later this year. The strength of the signal and the fact that it was not optimally oriented suggests a rate such that multiple binary black hole events should be observed in the second observation run O2.” In another paper produced by LIGO, they estimate between two and four hundred detections of gravitational wave events per year.

What will be discovered next? How will gravitational waves like these improve our view of the Universe? There are many more unsolved mysteries. Can we uncover the roots of the big bang? Where will the next big supernova take place? Humans are preparing to return to the Moon and venture onto Mars, how will that drama play out? Exploration and discovery are features of the “star stuff” of which we humans are made.

Gravitational waves such as these should tell us a great deal about black holes and neutron stars. But also, there should be gravitational waves from the big bang which can tell us more about the origin of the Universe. To unravel this mystery further, there are more experiments upcoming, and more institutions are planning detectors. Germany, Italy, and Japan already have gravitational wave projects, and the nation of India is arranging for the spare detector at Hanford to be placed within their borders. The European Space Agency has well developed plans to place a much larger gravitational wave detector in space. The next few years shall be filled with amazing discoveries, and we can expect our understanding of the Universe to improve without bound.

Rus Frizzell is a graduate of The Evergreen State College and lives in Olympia.

Next:
I feel the melodic song Of that northern wind Saying…