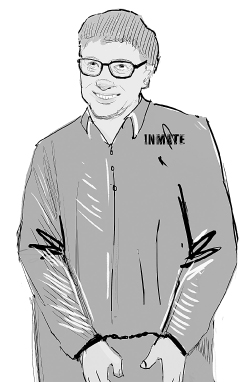 Tacoma – Imagine that you had to flee from your own country to a completely new place to find a new job. Once you got settled into the country, you ran a red light or made an illegal left turn. For most Americans, and especially for most white Americans, this might result in a $100 ticket or a slap on the wrist. But for brown Americans, law enforcement not only requests your Driver’s license and registration, but also your naturalization documents. Not only does this affect legal Chicano-Americans in that those who do not have documentation with them are at risk of being sent to detention centers as documented Americans, but it certainly affects those without naturalization documents or simply those who left them at home. For Chicano Americans, as well as those who may be mistaken for being Chicano, the initial response might be to convince the police that you are not undocumented. However, law enforcement makes the ultimate decision about where to send you after you have been detained in central lock-up. For many Chicano-Americans, both documented and undocumented, you end up in Tacoma Northwest Detention Center.

Believe it or not, this is exactly what happened to Rennison Vern Castillo. He is a documented citizen but still spent months in custody before an immigration judge set him free. The circumstances in another man’s case were very much so different, though. Angel Padilla was 17-years-old when he committed an armed robbery, which he says was a huge mistake on his part. Padilla served 19 years for this crime and when released was taken back to be locked up at the Northwest Detention Center in Tacoma. He did not commit an additional crime, but as an undocumented individual, his very existence proved to be a crime upon release from prison.

Some might say that the Northwest Detention Center serves a purpose, and that the inmates who reside there are dangerous and need to be kept away from documented citizens including women and children, who might fall victim to their predatory habits. But this opinion is all too common presently, as we have seen the mighty populism of Republican presidential nominee Donald Trump rear its ugly head. Xenophobic rhetoric is one thing, but when local Washington companies both operate against statistics and prove to be an efficient waste of money, all while violating basic human rights, we know what must be done. We know what must be done when only about 1,000 of the 1,300 detainees wear blue, denoting that they do not have a violent criminal history. We know what must be done when we consider that brown Americans who have simply violated traffic laws are bedded alongside the dangerous. We know what must be done when a major corporation like GEO Group makes a profit off the disastrous result of NAFTA and other destabilizing trade agreements which have negatively impacted Indigenous and Mestizo peoples in Mexico and Central America.

The Northwest Detention Center is operated by GEO Group, fronted by CEO George Zoley, and funded in part by the Gates Foundation. There have been many protests in the past three years organized by Presente and other groups surrounding issues like Angel Padilla’s lack of access to healthcare, specifically treatment for cancer he may have developed due to poor conditions in prison, as well as the conditions of “The Hole”, a place where hunger strikers are often sent for solitary confinement.

Our Rainbow Coalition has decided that based on the costs of incarceration with GEO Group, it would be much more efficient for ICE to put the “blue” detainees on house arrest and spend about $20/day to make the undocumented wear GPS ankle bracelets with occasional visits to their residences by officers. Our Rainbow Coalition has decided that it is the duty of both the Federal government (ICE) and the Gates Foundation (which is double-dipping by investing Seattle Public Schools testing programs which more often than not fail ESL students), to divest from GEO Group. We call for a boycott of all institutions to those the Gates Foundation has donated, as well as for future protests to occur outside the Northwest Detention Center in Tacoma as well as Gates Foundation headquarters in Seattle. The fight has not yet been won. GEO Group still needs to go. Please visit NWDCResistance.org if you are interested in volunteering to help shut down this facility.

The Washington Youth Rainbow Coalition is a sister organization located in Seattle, Washington.

Next:
Bingen, WA – Insitu is a local Washington subsidiary of…