Open government watchdog and advocate, Arthur West and his local group, WASHLITE (Washington League for Transparency and Ethics) have gained international media coverage for a lawsuit filed against Fox News and Rupert Murdoch for their repeated labeling of the COVID–19 virus a “hoax”. The story was first covered by the Times of San Diego on April 3, and has since been picked up by news outlets around the country and the world, including Vanity Fair, the Daily Beast, the Seattle Times, Forbes, several law-oriented newsletters, and papers in Germany, France, Spain and Holland.

The lawsuit, filed April 2 under the Consumer Protection Act, alleges that Fox News violated the act by “falsely and deceptively disseminating ‘News’ via cable news contracts downplaying the dangers to the public of the coronavirus as a ‘hoax’. “Defendants knowingly disseminated false, erroneous, and incomplete information, which was reasonably relied upon by the public and which had the effect of delaying and interfering with the implementation of effective mitigation and countermeasures against the virus,” the League said in the complaint. The suit does not seek monetary damages, but only seeks an injunction to stop Fox News from claiming that the pandemic is a hoax, along with reasonable attorney fees. The complaint has been found cognizable by Forbes’ lead attorney Bryan Sullivan, writing in Forbes magazine.

The lawsuit closely followed the publication of an open letter to Fox News signed by 74 journalism professors saying its coverage was “a danger to public health,” and urged the networks to “help protect the lives of all Americans—including your elderly viewers—by ensuring that the information you deliver is based on scientific facts.”

Fox News’ first reaction was to dismiss the lawsuit as frivolous. “Wrong on the facts, frivolous on the law,” said Lily Fu Claffee, general counsel for Fox News Media. A Murdoch executive told The Daily Beast “The strategy is no settlements, even if it costs way more to fight the lawsuit and seek sanctions for ambulance-chasing lawyers.” But within a few days, Vanity Fair reported that Fox insiders had expressed “real concern…that their early downplaying of the coronavirus actually exposes Fox News to potential legal action by viewers who maybe were misled and actually have died from this,” especially since Rupert Murdoch cancelled his 89th birthday party on March 11 at the same time top hosts like Sean Hannity and Trish Regan were telling viewers that it was all a hoax.

Since the WASHLITE lawsuit was filed, Fox has called in big guns, hiring Donald Trump’s favorite law firm, Jones Day. One of the planned four attorneys on the case was a lead lawyer, and “argued before the Florida Supreme Court on behalf of George Bush in the 2000 presidential election Florida recount controversy.” President Trump’s White House counsel, Don McGahn, was a partner in the firm.

Forbes’ Bryan Sullivan writes WASHLITE does present a cognizable theory of liability. Washington’s law only requires misconduct rather than having to prove actual damages.

The Consumer Protection Act provides: “Unfair methods of competition and unfair or deceptive acts or practices in the conduct of any trade or commerce are hereby declared unlawful.” It references television broadcasting stations saying it does not apply to those entities that distribute information ‘in good faith without knowledge of its false, deceptive or misleading character.” The lawsuit cites two examples of misconduct, though it expects far more will be uncovered during discovery. In one, Sean Hannity comments “Oh, let’s bludgeon Trump again with this new hoax.” In the second example, Trish Regan opines next to a graphic that reads “Coronavirus Impeachment Scam.” At least one poll found that Fox News viewers were taking the virus less seriously.

WASHLITE was at first represented by Green Party Washington gubernatorial candidate Elizabeth Hallock, who compared the free speech argument to Fox News yelling “‘There is no fire!’ when there is a fire.” The legal team has since gained the support of “Super Lawyer” Seattle attorney Catherine Clark, who volunteered to join the plaintiff’s team after reading an initial news account. Clark considers this a “case of national importance,” disputing claims the suit is “a political case.” She terms it “a case brought in the interest of the protection of the health, safety and welfare of the citizens of the State of Washington under Washington law so that the citizens can be well-informed on the dangers of this pandemic and the steps necessary to prevent the spread of this disease.”… (it) raises the question of how do we take care of each other as a country.’”

The case is on the King County Superior Court calendar with a trial date set for March 29, 2021.

Esther Kronenberg writes about environmental matters for Works in Progress. 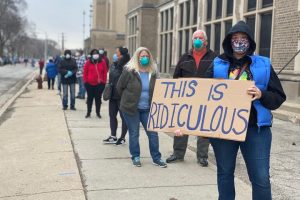