“We have to look in the mirror and ask, who are we as a country?  Are we the kind of country that intentionally targets families, and separates children from their parents?”—Senator Kamala Harris

Alex Rivera’s 2008 film, The Sleep Dealer tells the story of Memo, a young man who is forced to leave his home in Mexico to support his family.  Unable to cross the US-Mexico border, Memo finds work in a Tijuana factory.  There, electrodes are attached to his body and his labor is electronically transported to the US while his body stays in Mexico.  The technology of this future world provides a solution to “the immigration problem”—capturing the labor of immigrants, while preventing them and their families from entering the United States.

This brilliant critique of immigration policy could have been made today, not 10 years ago.  In April 2018 the Trump administration announced a “zero tolerance” policy for immigrants crossing the US/Mexico border.  All attempting to enter the country were arrested; children were taken from their parents and detained. 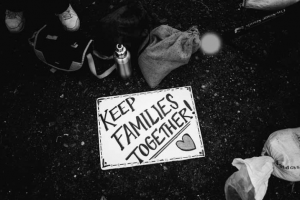 The story generated national outrage as people witnessed crying children and distraught parents on their internet screens.  A nation where “family values” are routinely evoked in political life was asked to accept scenes of family trauma as necessary to American security.  Although the policy was revoked, an estimated 400 children remain in detention.  In this time of crisis, Senator Harris’ question continues to echo: “Who are we as a country?”

At the same time guestworker programs that perpetuate family separation are widely accepted in the US.  Guestworker programs guarantee businesses a steady supply of low-wage immigrant workers while preventing those workers from settling here permanently with their families and becoming full members of the communities their labor serves.

As a child I learned Emma Lazarus’ poem on the Statue of Liberty: “Send these, the hopeless, tempest-tossed to me/ I lift my lamp beside the golden door.”

Most of us know this story, but are less familiar with its other side.  Family separation is shocking, but it is not new to US policy.  From the 1870s to mid-1900s Native children were taken from their parents and placed in boarding schools.  Every effort was made to separate them from their languages and cultures to prepare them for life as domestic servants and menial laborers.

Before emancipation, “breeding programs” forced Black women to have children who were the sole property of their owners and could be sold at will.

In the 1800s Chinese immigrants were recruited to build the railroads–yet while the workers labored to build the networks that expanded transportation and trade, they were reviled as a threat to US culture.  They were not allowed to bring family members with them, and in most states, were legally prevented from marrying US citizens.

The 1942-64 Bracero program brought Mexican workers to labor on US farms  but denied entrance to their families.  The value of Indigenous, Black, Chinese or Mexican workers stemmed entirely from their labor power, not their cultures, languages or families.

Although Americans don’t agree on what constitutes a legitimate family, most of us,  not just conservatives, see families as the foundation of community and national life. Families teach values to their children and raise responsible citizens.  Families, however we define them, are central to our conception of a functioning democracy.

Whose families have value?

The Trump administration’s willingness to separate and detain Mexican and Central American families is an alarming continuation of a long-standing racial and class bias in American policy that has implications for how we think about community, democracy, and national identity and belonging.

So: whose families have value?  Whose families deserve support?  We are witnessing the continuation of policies that uphold the economic interests of a privileged class at the expense of human—and family—well-being.  They are policies legitimated by long-standing traditions of white supremacy and dominance.  The combination of an exploitative economic system with white supremacy is a deadly one that has resulted in a war on immigrant families, poor families and families of color—even while we as a nation proclaim the importance of family values.

The Trump administration characterizes immigrants as criminals, and justifies family detention and separation as necessary to public security.  It seeks to end “chain migration,” the policy of family unification which gave priority to relatives of immigrants living here legally.  It tried to end the DACA program which provided opportunities for over 700,000 aspiring young people to work and go to college, and it is restricting access to refugee status and asylum.

Guestworker programs are again on the rise

While the Trump administration closes doors to immigrants, and criminalizes undocumented immigrants and families, dependence on guestworker programs is growing.

H-2A impacts workers on both sides of the border: bypassing workers who are already here and locking them into low wages, gutting farmworker unions, and subjecting guestworkers to increased wage exploitation. David Bacon’s article in this issue also makes it clear that growers are increasingly relying on the services and funding of the state in order to eliminate their obligation to provide essential services like housing (see “What was the life of this guest worker worth?”, page 8) Missing from this policy is any possibility of acquiring residency or citizenship. Guestworkers are forbidden from bringing their families, who must remain in their country of origin, while their loved ones labor in the US.  The value of guest workers lies in their commodified labor, not their contribution to family or community life.

Evelyn Nakano Glenn calls guest work policies a “sojourning strategy.” She explains,  “the host country benefits from the labor of sojourners without having to incorporate them into society.”  The strategy creates split households separated from one another for years, perhaps permanently. Glenn writes, “The split household form made possible the maximum exploitation of the worker.”

If we want to create a just society, we must assess the entire apparatus of exclusion being developed by the current administration. This means taking our token support for family values seriously. We must scrutinize not only the brutal policies towards those walking across the border in search of a better life, but proposals to continue or expand the flow of immigrant workers, end the DACA program and reduce access to refugee status. If current policies continue, immigrants will remain exploited sojourners whose sole “right” is to labor in our fields and factories. For them, the golden door will never open.

Anne Fischel is a documentary filmmaker. She taught at The Evergreen State College and is a member of Strengthening Sanctuary in Olympia.