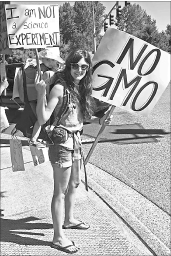 Earlier this year, on March 7, the coalition attempted to deliver over 40,000 petitions to the Costco store in Downtown Seattle, where store management refused to accept the signatures. In response, allied groups across the nation, including Friends of the Earth, Food & Water Watch, Center for Food Safety, Food Democracy Now!, Sum of Us, Community Alliance for Global Justice, Campaign for Safe Food, and Organic Consumers Association, collected more than six times the amount of signatures originally delivered.

In response to the FDA’s likely approval of GMO salmon, Friends of the Earth has been leading a national campaign calling on grocery stores to commit to not selling genetically modified seafood, even if the FDA rubberstamps GMO salmon. The hope is that massive pre-emptive rejection of genetically modified fish will demonstrate that there is no market for modified meat and dissuade the FDA from approving it. To date more than 60 retailer chains, including Safeway, Kroger, Trader Joes Whole Foods, Kroger, and Target, have committed to not selling genetically modified fish. These chains comprise over 9,000 stores. Although Costco is one of the largest retailers of salmon and seafood in the U.S., it has yet to make a similar public commitment.

At the June 25 petition delivery CAGJ Organizing Director Danielle Friedman explained these concerns to Costco Merchandizing COO Doug Schutt, who said that although Costco currently has no plans to purchase GMO salmon it would be “disingenuous” to agree never to sell it. He reiterated that Costco is committed to doing the “right thing”, and that there are a lot of “unknown’s” regarding GMO’s. What is known about the species of GMO salmon under FDA review, AquaAdvantage Salmon, is that it combines DNA from three fish species and grows twice as fast as natural Atlantic salmon. Compared to non-modified salmon, the AquaAdvantage breed have 40% higher levels of the hormone IGF-1, consumption of which has been associated with various forms of cancer. Engineered fish are also more susceptible to disease than their natural counterparts. Factory fish farms tend to rely heavily on antibiotics and other chemicals to control disease in their populations. Chemically treated fish are proven to adversely impact human health. An increase in diseased fish is likely to cause wider use of antibiotics and other harmful toxins.

Researchers have concluded that 60 GE salmon could displace a population of 60,000 non-modified salmon in a span of 40 generations. They have further potential to reduce biodiversity through breeding their modified genetics into natural populations, thereby eradicating the gene pool of local species. This could have devastating impacts on our environment and global food supply.

“Genetically engineered salmon are a threat to the Pacific Northwest,” said Dylan Knutson, General Manager at local Loki Fish Company and one of the participants in the June 25 Costco petition delivery. “On top of the documented issues associated with farmed salmon — escapement, pollution, and a net loss of protein per pound of fish produced — introducing a frankenfish opens Pandora’s box of probable environmental catastrophe. We need to be restoring native habitat and nurturing a properly managed wild fishery, not perpetuating the problems of the farmed salmon industry with genetically engineered salmon.”

Following the rally, Costco released this statement to Kiro 7 News: “Currently pending before the United States Food and Drug Administration is a request for approval to import to the United States-farmed salmon that is genetically modified. This species is said by its proponents to be more efficient in converting feed to gain. Efficiency in aquaculture is a factor that we consider in our sourcing, particularly reliance on forage fisheries for fish oil and fish meal. Based on the information available to us at this time, however, and the absence of regulatory approval, we do not plan to sell GMO salmon. We will continue to monitor development.”

This statement demonstrates that as Costco internally deliberates its stance on GMO salmon, consumer health and safety is taking a back seat to efficiency. To persuade the retail chain to truly do the right thing it’s imperative to continue letting them know that we do not want modified fish on our dish. Please sign the petition demanding Costco reject GMO salmon at CAGJ.org/food-justice/solidarity-campaigns/gesalmon, and call Costco’s headquarters at 1-800-955-2292 to give them a piece of your mind. By swaying Costco we can convince the FDA that frankenfish is not okay!

Jordan Beaudry, a CAGJ volunteer, has a pen in his pocket and a passion for social justice.

Next:
Bias against those homeless is fought by recognizing their inherent…