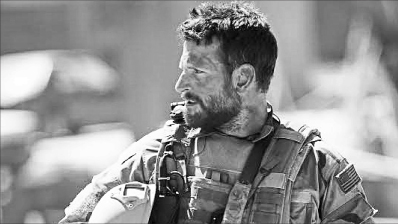 American heroes in black and white: The celluloid lives of Selma and American Sniper

To the memory of Malcom X, gunned down fifty years ago as he was beginning to delineate a radical program to challenge oppression in all its forms.

Take #1: Films are socially manufactured products (even those by Woody Allen)

Sometimes we tend to forget that films are products manufactured under specific social circumstances and specific economic relations. These relations determine the manufacture, distribution, and marketing of films. Neither Selma nor American Sniper can escape this reality. Both films are ‘visual products’ of capitalist America in the year 2014. Selma and American Sniper were both made to be watched by an audience living in our current historical time. Both movies were manufactured, distributed and sold for profit, but one of them (American Sniper) is a box office success while the other (Selma) got a much less effusive response. Woody Allen acknowledges this principle and suggests some of the reasons behind events like this when he states: ” If my films do not show a profit, I know I am doing something right”.

Movies are commodities manufactured within specific economic systems, but at the same time, movies are a special type of commodity–they are ideological products with a huge impact on audiences. That is to say, although in general movies express the ideology of the system in which they are made, simultaneously movies can reinforce that very same ideology. The key criteria for judging a movie from a progressive or revolutionary perspective is to determine whether the film disrupts or perpetuates the connection between cinema and the prevalent ideology. In this sense all films are political since they either question the dominant ideology or endorse it (with different degrees of intensity for each position, from total to partial). This is the main demarcation between Selma and American Sniper. It is not the nature of the plot, nor the actors, nor the directors. Technically, both are powerful movies. While Selma presents us with clear images and messages of discontinuity and a critique of the official State of Alabama position on race and voting rights for black people in the 60’s, American Sniper walks a straight line of agreement and entanglement with American foreign policy and its hegemonic ideology of war and occupation.

Take # 3: The bellicose mind of America

Verifying the different cultural response at the box office obtained by American Sniper versus Selma presents no surprise. As of February 16, Clint Eastwood’s film had generated $306,478.136 million dollars in revenue, roughly six times more than Ava DuVernay’s Selma, which brought in $48,514.386 million dollars. This dissimilarity in revenue cannot be explained solely by formal cinematographic factors or the technical qualities of each film. Although the differences mentioned above do exist – they are separate movies after all – the box office rewards American Sniper, the film that emerges out of a society with a long tradition in which war against the other is an important element of its national identity.

According to the Committee of International Relations (U.S. House Committee of Foreign Affairs), from the year 1900 until the present, the U.S. has been involved in 206 military operations in foreign territories. This number includes full-scale conflicts such as the two World Wars, and minor scale operations such as direct military assistance in El Salvador against leftist guerrillas. This figure does not include clandestine operations carried on by the C.I.A. and other intelligence or counter-intelligence agencies. This figure represents an average of 16 military interventions per decade, or 1.8 interventions per year since the beginning of the XX Century. Equally important to consider is the number of U.S. military bases and installations in nations overseas. The following list shows the branch of the military and the name of the country were the bases are located, and in parenthesis the number of existing bases.

That is a total of 344 military bases on foreign countries, which ironically is almost the same number of bases and installations we keep at home–320 (including those in Puerto Rico): Army (171), Marines (18), Navy (60), and Air Force (71).

No other modern nation comes even close to the magnitude of this dubious militaristic record!

A war infrastructure of this enormity is not possible without an economic structure based on a similar large scale “military industrial complex” able to guarantee and support the continuous expansion of American interests abroad, while internally, through multiple ideological and media mechanisms (the cinema industry being one of them), molding and expanding in the American unconscious a favorable ideology towards war and occupation. It is against this backdrop that the box office success of American Sniper and the proliferation of war movies can be better understood (from cowboys killing Indians and Mexicans, to current middle-east war films such as American Sniper, and intergalactic fantasy war movies). Sadly, we live in a cultural situation in which, to use the words of French film critics Jean- Luc Comolli and Jean Paul Narboni, “What the public wants is what ideology wants”.

Take # 4: Heroes in black and white

As suggested in previous paragraphs, films are socially manufactured products, but nonetheless, filmmakers can take a stance regarding the film’s function either as enforcers or contrarians to the dominant ideology. The area in which Selma most clearly offers a negation of hegemonic cultural American values is the film’s vision of the hero. In spite of the prominent role of Martin Luther King Jr. (played by David Oyelowo) Selma is not about MLK. It is not about any single man or woman; it is about the courage of a collective hero, a group of black men and women, and later as the tension of the marches intensify and the struggle grows, about white men and women who in unison with blacks in a non-violent fashion, expressed discontent against social discrimination. There is not one isolated hero crossing the Selma Bridge demanding voting rights for black people in Alabama, but a collective of human beings. Selma is not a march of one but a march of many, in which the actions on behalf of others are understood to have value for their social character and not as an individual risk. The indictment of the unjust situation for blacks in Alabama in the 60’s is a social indictment of the best possible kind, one that assumes the form of active participation in national politics that demonstrates an understanding of the functioning of society and of State institutions.

American Sniper on the other hand, is the last commercially successful version of the ‘American Adam” so popular in U.S. cultural mythology. It was defined in 1955 by R.W.B. Lewis as “the hero of new adventure … an individual standing alone, self reliant and self propelling, ready to confront whatever awaited him with the aid of his own unique and inherent resources”. This type of hero is by definition masculine (at least in appearance) and alone. The movie tracks loosely the life and military career in Iraq of Chris Kyle (played by Bradley Cooper), a troubled but remarkable marksman responsible for over 160 deaths. The film narrative, as all narcissistic narratives do, ignores the social and moral implications of the Iraq occupation, and is marked by the main character’s indifference (or inability) to relate to others. At the same time, the narrative coats his indifference with simplistic patriotism and crude vilification of civilian Iraqis as “savages”. Ironically, director Clint Eastwood argues that the film is “the biggest anti war statement any film can make” given the duress experienced by military personal returning to civilian life; but in fact the film is far from being a critique of the neglect experienced by veterans, and more an idealization of war and the role of the individual. In a way, American Sniper is the equivalent of our newest military weapon, the drone: detached, lethal, and impersonal.

Both movies are worth watching. One depicts a mass movement overcoming a social injustice while the other reinforces a drama-like indifference to an international tragedy.

Next:
On Saturday, February 21, Patricia Pyle died unexpectedly. The cause…