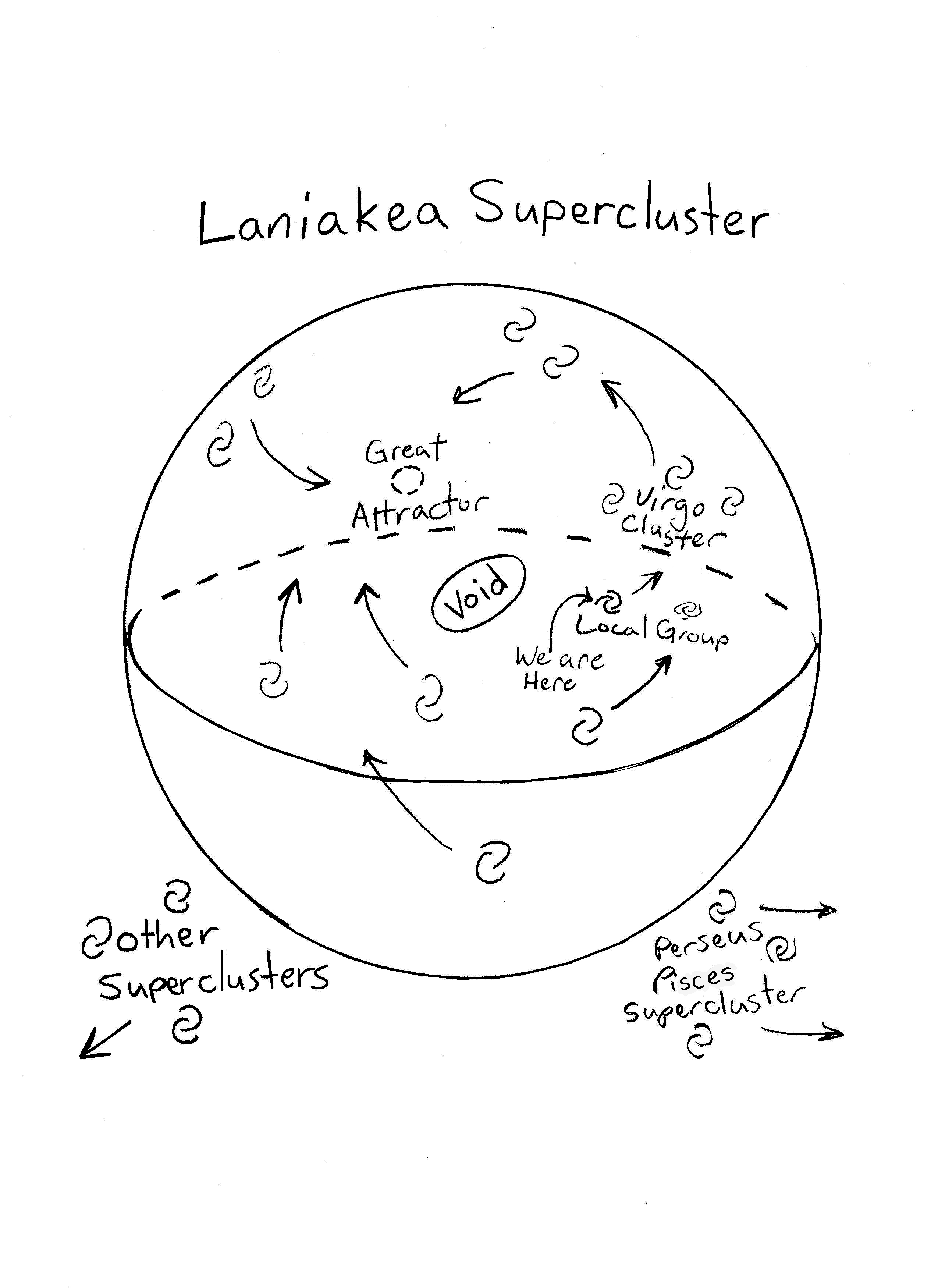 Adventure and mystery in Laniakea

Laniakea, as Wikipedia defines it, is a Hawaiian word meaning, “immeasurable heaven.” The exciting thing for me is to finally see a well made map of our actual neighborhood in the Cosmos.

The British science journal Nature recently released a fantastic four minute video on YouTube called, “Laniakea: Our Home Supercluster.” We now have this clear view our home port – something the human race has never had before. It is the recently released description of Laniakea by R. Brent Tully and his team of astronomers at the University of Hawaii.

Our galaxy, the Milky Way is part of a Local Group which contains around 75 nearby galaxies. Our Local Group roams the edge of the Virgo Cluster of about 2500 galaxies. This is a very big neighborhood.

Bigger still is our supercluster. Our neighborhood revolves around the center, a place called the Great Attractor. We now have a clear idea that the 100,000 galaxies of Laniakea are all bound together by gravity.

All the while we are gliding through space along with a plethora of other clusters of galaxies. These clusters are in mutual orbit around the Great Attractor – the gravitational center of our supercluster of which there no known way to leave.

The other superclusters are expanding away from us at an accelerating rate. This will eventually fling them out of sight far away across the Universe. But our Laniakea will probably always be here as a very large and wondrous domain for us to explore.

To explore on not to explore?

Our galaxy, the Milky Way, is in mutual orbit with the great galaxy Andromeda. In several billion years we will be much closer together and likely to merge with each other. Humans will have little choice but to populate other star systems or perish as our Sun advances through the red giant phase of its life.

100,000 galaxies with 100 billion stars each, that’s room for lots and lots of possible adventures. Ten quadrillion solar systems with an unknown quantity of alien civilizations to meet.

The number of possible extra-terrestrial civilizations can be estimated by using the famous Drake equation. It is quite easy to estimate for yourself:

The number of extra-terrestrial civilizations within Laniakea which we may run into in the future just requires us to multiply a few estimates.

N(hab) is the number of habitable planets, I’ll guess one in ten stars out there has one.

F(life) is the fraction of these where life gets started some how, my guess could be one in a hundred.

F(civ) being the fraction of these where life develops into a space-faring civilization, maybe one in a thousand.

F(now) is the fraction where that civilization exists during our time period (civilizations come and go we guess) may be one in a hundred.

N(civ) the total civilizations estimated to be in Laniakea today.

Divide the ten quadrillion stars of Laneakia by the one hundred millionth chance of a civilization being there. The estimate is on hundred million strange, advanced, diverse, alien civilizations out there for us to meet, this does not include ones which might visit form neighboring superclusters like the nearest, the Perseus-Pisces Supercluster.

Many people feel we should fear these civilizations. I think that is ridiculous. We should be searching for ways to cooperate and coexist with them, as well as ourselves. We need a conversation above all, to decide how we will handle contact with these alien civilizations who may have much to teach us.

As Laniakea, “immeasurable heaven,” swirls through space with our Milky Way hanging onto its skirt tail, we have so much adventure ahead. The European Space Agency just landed a probe on an approaching comet. India just placed its first satellite in orbit around Mars. China is staging for a return to human Moon landings. We have more opportunity than ever to cooperate with other explorers.

Russ Frizzell is an activist living in Olympia since 2010 and a graduate of The Evergreen State College where he studied Physics and Cosmology.

Next:
In October of 1968, ten days before the Summer Olympics…