It is only under the shelter of the civil magistrate that the owner of that valuable property, which is acquired by the labor of many, or perhaps of many successive generations, can sleep a single night in security.

[From Adam Smith, Scotsman and moral philosopher, writing in Book V of The Wealth of Nations. His scathing critique of merchants is ignored by conservatives who prefer to falsify Smith as the father of their “free market.’]

The nurse lays the newborn gently on the mother’s breast and smiles congratulations. This little human has won the birth lottery: male, white, American, rich and wanted. Odds are he will grow up to be healthy, well-educated, well-paid and occupy a position of responsible authority in our society (Rather like Bret Kavanaugh). Contrast that with the infant who comes into the world unattended, brown, indigenous and penniless. We don’t even calculate odds for that little human.

I think of the “birth lottery” often these days when I read about families walking from Central America to the border of New Mexico. Or fleeing from Syria, Afghanistan, Sudan, Iraq and elsewhere, from one border to another.

How is it that I’m not one of them? Part of the answer is simply the accident of birth – where and when and to whom. I was born in the heart of the empire, not in one of the colonies designated for exploitation or an ancient country designated to be “liberated” by us, or a country already facing drought or inundation as they reap the climate we have sown. I was born at the end of WWII to white parents at a time when economic opportunities for them were plentiful. The odds of my being able to live an easy life were good.

But there is more than birth to winning or losing, and we hope some of the articles in this issue of Works in Progress shed light on some of those things.

Our competitive market economy works like a game—for someone to win, someone else must lose. That doesn’t seem like a very democratic way to run an economy, but that’s not the worst of it. The playing field isn’t level; the rules favor the wealthy and if the wrong people come too close to scoring, the referee can have you arrested and carted off to jail.

The cliché about the golden rule is “them as got the gold make the rules,” and you can read examples of that in the article about renters asking for lower move-in fees and the city granting tax exemptions to wealthy developers. Our lead story about Medicare for All, and the reflections from a red-diaper baby about “socialism” talk about attempts to level the playing field. The story about ICE raids on workers and the anniversary of the Wobbly massacre in Centralia remind us that unions serve to beef up the strength of our teams.

Sometimes your only recourse might be to rush the playing field and bring the game to a halt – the stories about the Vietnam Moratorium and the Citizen Revolution in Ecuador are examples of that. Maybe those approaches should be considered for the next “Women’s March” in January 2020…

Or you might want to leave the game and start a new world—“Small Victories” and the Congress of Municipal Movements are about people moving in that direction. Maybe the co-op movement is part of a new world, too, and the article about the Waldorf education model—redefining the idea of “winning.”

WIP is on hiatus in December.

The game we know as “monopoly” was invented by Elizabeth Magie, a follower of the economist Henry George, as a way to demonstrate the destructive economic effects of monopolies. Magie however did not benefit significantly from her invention. Instead millions were made by a man who sold a version of the game to Parker Bros. claiming it was his invention.

Henry George believed that virtually all economic problems arise from “the fact that the land on which and from which all must live is made exclusive property of some.” His goal was to make all land common property, and he realized that “it is not necessary to confiscate land; it is only necessary to confiscate rent.” —Photo and players courtesy of Lori Lively 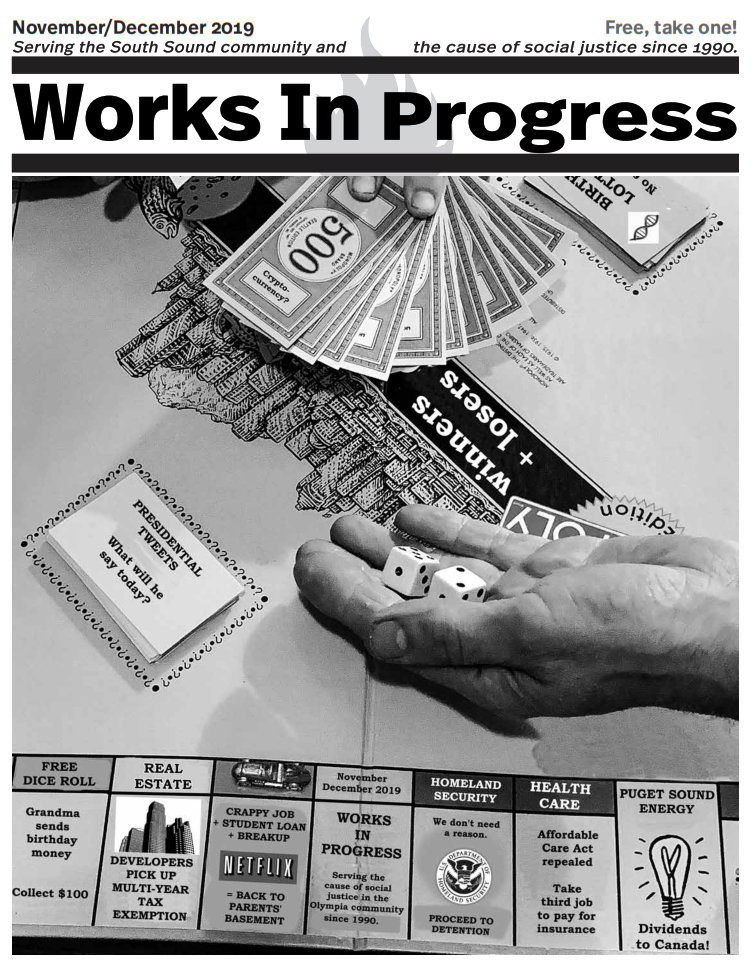 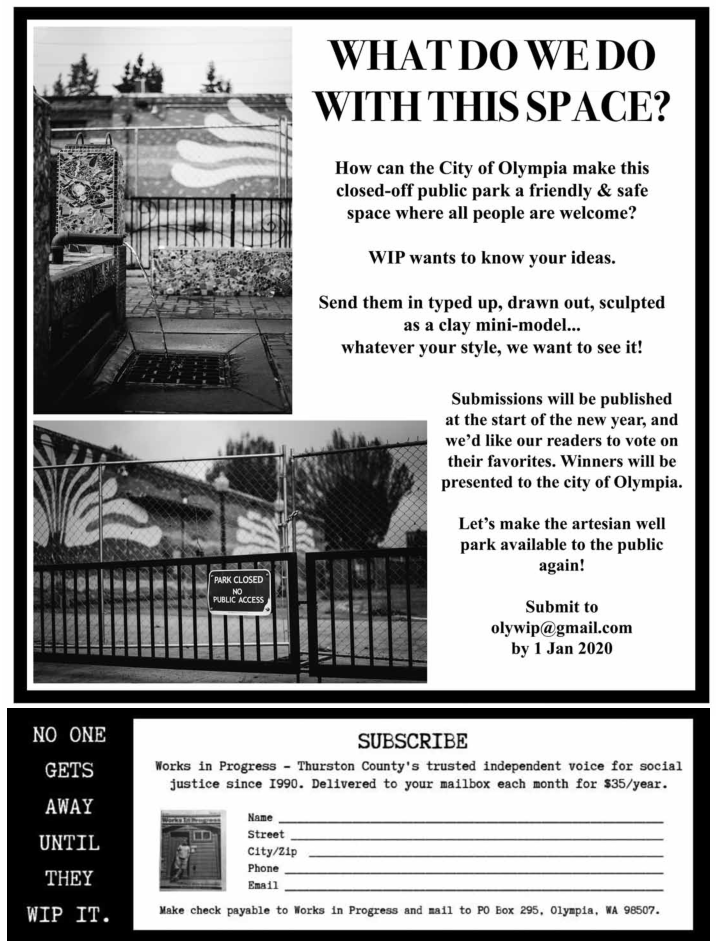