A toxic past that threatens our future: The latest real estate scheme for Green Cove Basin 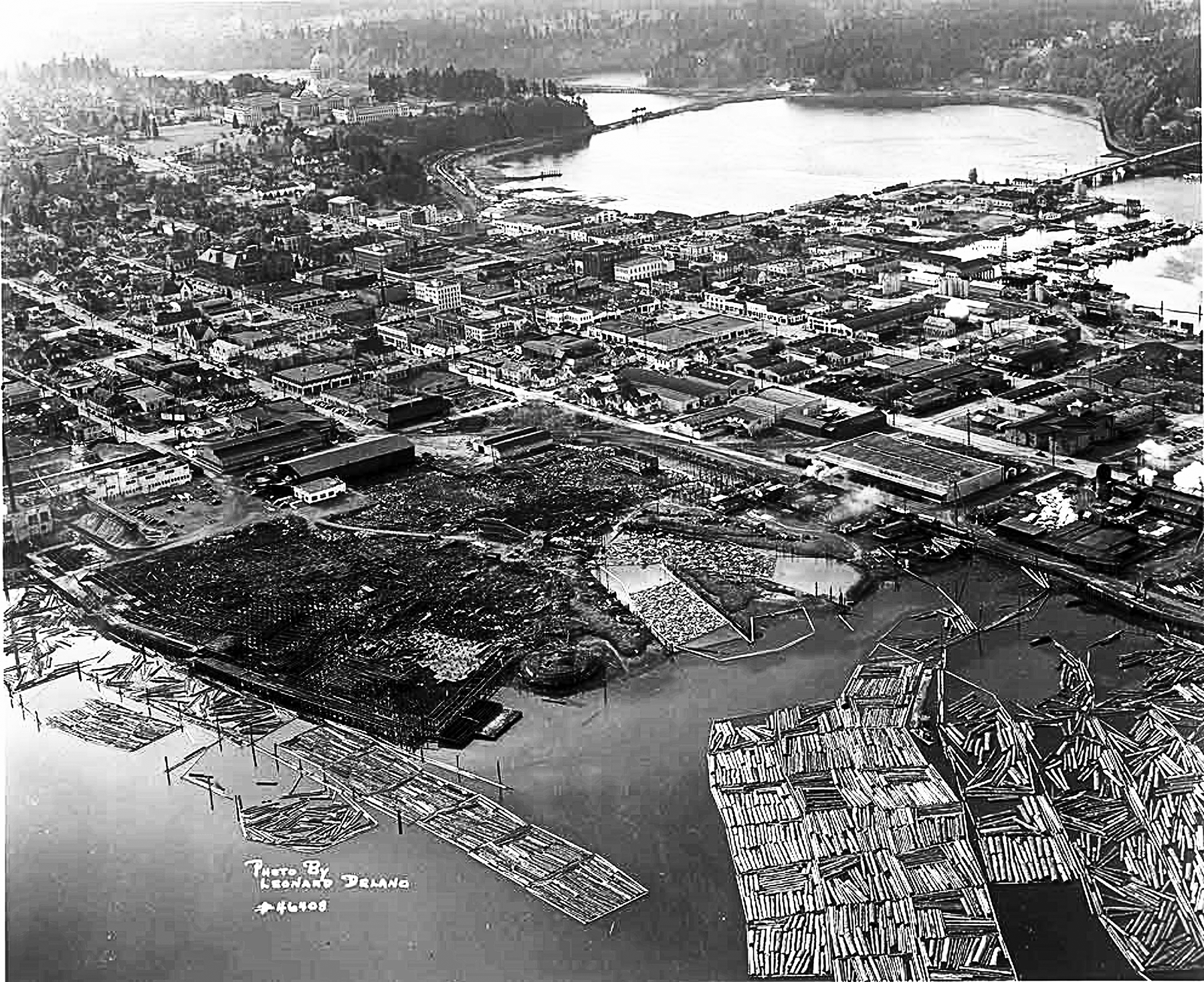 There is much hidden under the surface in the most recent effort to put a housing development at 2200 Cooper Pt.

Rd. in the Green Cove Basin. The site, known for generations as the burial ground for hazardous waste, is now the focus of private efforts by well-connected insiders to make development inevitable.

Green Cove Basin is a unique piece of the South Sound ecology singled out for special protections in the City’s comprehensive plan. It sits on a critical aquifer recharge area that tops the capture zone of the Allison Springs wellhead—a vital source of drinking water for the City of Olympia.

Yet a section of the Basin served for 65 years as an illegal dumping ground for toxic waste and debris from the Port and the City of Olympia, the Weyerhaeuser Corporation and others.

A site identified for protection

Recognizing its complex and sensitive nature, Thurston County and the City of Olympia adopted The Green Cove Creek Comprehensive Drainage Basin Plan in 1998. The Plan prioritizes prevention of problems related to water quality and flooding, and protection of habitat. Pollution from stormwater runoff was a major concern.

The Sundberg site is surrounded by and hosts 5 wetlands, all protected by the Clean Water Act. The wetlands on site are so degraded from mining activity, they cannot infiltrate runoff. Almost all stormwater travels off the site into the protected waters of Puget Sound, habitat for threatened winter steelhead and fall Chinook salmon runs, and the endangered Olympic mud minnow.

Free dumping of toxics and trash

Ted Sundberg owned the property from 1937 and operated it as a sand and gravel mine after logging it. Over many years, the Port of Olympia, Weyerhaeuser Corporation and other industrial firms, and the City of Olympia were among those who dumped garbage and toxic waste onto the site, leaving it to leach into the surrounding soil and water.

The Port of Olympia made early use of this unregulated site just 4 miles distant in 1949, when an earthquake damaged Port piers and pilings. Wood transported from the Port and other polluting businesses had been treated by a process that involved creosote, chromated copper arsenic (CCA) and pentachlorophenol (PCP). Each of these chemicals has toxic properties that threaten health and safety when not properly disposed of.

Weyerhaeuser operated an export log yard on the site from the late 1960s until 1990. During that time, Weyerhaeuser sprayed its forests with the insecticide DDT and the herbicides 2-4-D and 2-4-5-T, ingredients of Agent Orange that contain dioxin, one of the most toxic substances in existence. (See sidebar for these and other specific hazards.)

The City of Olympia had also dumped material at the site. Sundberg’s policy of “bring a dump load and take a truckload of soil or gravel” was well-known to locals. According to 2005 staff emails, the City was aware that Sundberg accepted materials from off-site and admitted that it too had dumped excavation material from the cross-town gas main at the quarry. Its reputation as a dumpsite continues to this day. Jim Elliott, a longtime resident of the area, worked for Sundberg in the 1950s driving trucks of fill from the Port. He informed the City in 2007 that the property had been filled many times over the years.

The City steps in to enable a real estate project

Olympia in 2004 accepted a plan from Jerry Mahan for “Sundberg Estates,” and then informed him that the area was in Thurston County. Staff instructed him to file a petition for annexing the land to the City to get sewer and water service.  Since the Sundberg property was assessed at a substantial portion of the 60% needed for annexation, the petition was completed. Even with help from City staff, the annexation still faced serious questions. One email indicated that the County would oppose annexation on the grounds that it didn’t meet the requirements for urban growth and that it “would be bad for the environment and thus is inconsistent with GMA [Growth Management Act].”

Despite such questions and over the objections of many longtime residents, annexation was approved.  City Manager Steve Hall congratulated staff in an email the following morning. Assured of access to the City water and sewer system, Mahan completed his purchase of the property in 2005.

Dumping didn’t stop after Mahan acquired the property. Mahan dumped fill from excavations at his other housing developments. Neighbors report seeing 400 or more truckloads of fill arriving at the site; aerial photographs on Google Earth confirm the dumping. DNR reports from 2014 also corroborate the “illegal dumping of wood waste” at the site as well as piles of fill, soil and construction debris.

In 2015, trucks deposited garbage, sediment and numerous floating docks from the Swantown Marina on the site. Fumes from the waste burned the throat of Jerry Dierker, a neighbor whose Butler Creek pond and stream receive stormwater and groundwater runoff from the site. The incident led DNR staff to stop Mahan from dumping waste there.

Green Cove remains unsuitable for development, and yet…

Annexation did not fix the fact that the Green Cove property is unsuitable for development. Undetermined amounts of toxic waste, unstable fill, stormwater flows, infiltration to a critical aquifer all pose dangers to homeowners, the environment, and our water supply. As noted in a recent letter from the Squaxin tribe,” the presence of contaminated soils underlying the development would ensure that the continued contamination of soil, water, wetlands and groundwater would be made permanent.”

In January of this year, Olympia CP&D staff accepted a new application for “Green Cove Park,” Mahan’s latest project incarnation. Concerned citizens organized with local environmental and civic groups to impel the City to look closely at the proposal. After months of review, the staff noted numerous data gaps and stated that the project must comply with the Green Cove Basin standards. They wanted further testing for contamination of soil and groundwater and for impacts on sensitive offsite areas.

Mahan’s record of continued dumping and insufficient compliance with requests from the City, or even directives from the Department of Natural Resources, doesn’t offer much confidence that this time will be different. Mahan’s paperwork is full of discrepancies and his handling of permits lacking.

But that might not matter. At a meeting this fall, Mahan indicated that he will request deviations from stormwater design and wetland protections otherwise required. The meeting excluded members of the community, but did include an A-list of Olympia power-brokers. On Mahan’s team were Doug Mah representing the Thurston Chamber of Commerce and Mahan’s new attorney, Heather Burgess.

Burgess is the attorney for the Port of Olympia, as well as legal counsel for the Thurston Chamber, and President of the Thurston Economic Development Council. Doug Mah was on the City Council when it voted to annex the Sundberg site. Soon after the Chamber formed its public policy division, the City of Olympia signed a contract to join its Legislative Partnership. Olympia Mayor Cheryl Selby is a client of Mah & Associates, as is the Port.

Like the site itself, there is more beneath the surface regarding the City’s actions to promote this project. Upcoming installments will clarify those issues, as well as the threat posed to the Green Cove Basin, to our water supply and to habitats —and offer clues to the fate of the rats who currently occupy the dumpsite.