A real opportunity for renters to become owners

“If it were not for our community being self-managed, and maintaining the same rent since inception, there would be no way I could afford to live in this area.” That’s the happy situation of Peggy Searce, a 71-year-old retired nurse and resident of Hidden Village.

A community of homes, not investment properties

Hidden Village is a 20 home, tenant-owned manufactured housing co-op in Olympia that offers residents shared ownership and democratic control over where they live. Peggy owns her home and volunteers as board president. Rent has not increased in the 12-year history of the co-op. Speaking to the importance of tenant ownership and control, Peggy said, “The ownership and self-governing of the park allows us a long-term place to reside without the fear of someone coming along and buying the land our homes sit on and raising the rates.”

Peggy and other Hidden Village residents had the good fortune to live in a community whose owner, when he decided to sell the property, was willing to sell to the residents in good faith.

The demands of the commercial housing market

This is not a common situation. Instead, low-income seniors in commercial housing struggle to pay rents. They live in perpetual insecurity as properties change hands and sometimes get purchased for

redevelopment. The economic shutdowns of the pandemic have made things worse. As eviction moratoriums inevitably come to an end, many people are likely to be unable to pay back rent. Owners might decide they have to sell distressed properties — or evict tenants in favor of converting to pricier condos — removing more affordable units from the market and pushing people deeper into crisis.

“Tenant opportunity to purchase” as one solution 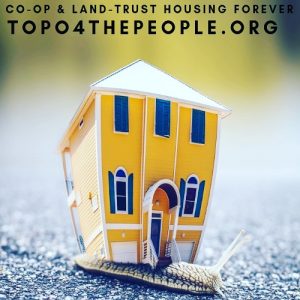 Washington State and Olympia communities are more than ready for a law that would give tenants a chance to ensure their housing in the immediate and foreseeable future by giving them the opportunity to purchase their homes.

Waking up to find your home sold

Most commercial housing real estate deals happen behind closed doors, and residents seldom get notice that the place they live is being sold. Large equity investment firms like the Carlyle Group and Blackstone target affordable manufactured home parks and apartment complexes with the objective of leveraging massive profits through rent increases, and reaping speculative returns by flipping property. This allows them to drive up the market price by making exorbitant offers.

Bow Lake, a 450-home senior home park in SeaTac, was recently purchased by the Carlyle Group for $20 million above market value. Carlyle was also the purchaser of Friendly Village, a 245-home senior community on the westside of Olympia. There, they immediately increased rents offered to new tenants by 30 percent above existing rates.

How a “tenant opportunity to purchase” works

A strong TOPO in Olympia would leverage opportunities for co-ops, land trusts and nonprofits to better compete with private equity firms by allowing these groups the first opportunity to purchase a rental community when it comes up for sale. Tenants, nonprofits and government agencies would be given notice of sale along with a purchase price, and would be granted adequate time to obtain technical assistance and make an offer on the property.

If a tenant co-op or other qualified organization matches the listed price, it wins the bid. With that success under TOPO, the new owners are required to adhere to long-term preservation of affordability requirements.

A track-record of success and new adopters

Washington DC’s TOPA law has been around since 1979 and has enabled the development of over 100 multi-family housing cooperatives, keeping hundreds of individuals and families from having to enter an overheated housing market. States across New England have decades-old TOPO laws offering preservation rights to manufactured housing cooperatives. In New Hampshire, a third of all manufactured home parks are now resident-owned co-ops.

In recent years, many states and cities have pursued TOPO laws as part of a long-term solution to the affordable housing crisis. San Francisco passed a version entitled COPA in 2019, and Berkeley and Oakland are pursuing strong models driven by tenant organizing. Seattle recently strengthened its “notice of sale” ordinance and Burien followed suit with their own version. Other states including Oregon and Colorado have also recently passed versions of opportunity to purchase laws.

Co-ops in Olympia and throughout the state

Over the last 12 years, the Northwest Cooperative Development Center has helped convert 17 manufactured housing communities into co-ops by providing them with access to finance and ongoing technical assistance. There are currently 6 housing land trusts starting up around the state including the Thurston Housing Land Trust which holds a strong commitment to democratic community ownership.

Making TOPO a reality in Olympia and the state

The Association of Manufactured Homeowners is running dual “tenant opportunity to purchase” bills this legislative session sponsored by Sen. Patty Kuderer and Rep. Davina Duerr. Last year, a similar bill, EHB 2610, fell just shy of passing into law. The state also invested $2 million in the last biennium to support the conversion of more manufactured home cooperatives. The City of Olympia Land Use Committee plans to explore TOPO in the first quarter of 2021 and staff are considering TOPO as a focus of the revised Housing Action Plan.

TOPO has the potential to empower low-income residents with the chance to own their homes, run their communities democratically, maintain affordability, and compete with elite investment groups buying up our city. We urge the Olympia City Council and the Washington State Legislature to make tenant opportunity to purchase a top legislative priority.

TOPO 4 The People is a local focus group committed to broadening public interest in tenant opportunity to purchase. Visit www.topo4thepeople.org to learn more or to sign the TOPO coalition letter. A lost opportunity
for housing

A lost opportunity for housing

The Housing and Urban Development Act of 1968 was the biggest housing bill in the history of the United States. The Act included a smorgasbord of new ideas: Model Cities, Section 235 homeownership subsidies, Section 236 rental assistance, business insurance, a robust increase in public housing construction.

The Act also reaffirmed the nation’s commitment to a decent home and suitable living environment for every American family. Congress funded the programs at historic levels so they would succeed.

The program was working, but around 1972 it died. It was killed by Richard Nixon in response to racism and opposition to government programs. His conservative approach steeply reduced funding, disbursed responsibility to states and set up voucher programs. It was the beginning of the end for the promise of housing for every American.